OTTAWA, June 15 (UPI) -- Conservatives say Justin Trudeau, leader of the Liberal Party of Canada, should repay money he was paid by a charity for an unsuccessful speaking engagement.

The Grace Foundation, which supports a home for the elderly in St. John, New Brunswick, paid Trudeau $20,000 (the U.S. and Canadian dollars are almost at par) to speak at a fundraiser last year. While the foundation initially described "An Evening With Justin Trudeau" as a great success, a board member, Margaret Buck, wrote him nine months later, saying the evening was a money-loser and asking him to return his fee, the Canadian Broadcasting Corp. reported.

Trudeau, the son of former Prime Minister Pierre Trudeau, was an advocate for a number of causes and later earned fees as a speaker. He continued to take speaking engagements after he was elected to Parliament in 2008 but said he stopped when he began seeking the leadership of the Liberal Party.

The office of Prime Minister Stephen Harper released information about the Grace Foundation engagement, saying the group sold only $6,000 in tickets, the CBC said. Jason Kenney, speaking in Parliament on Friday, accused Trudeau, who was not present, of profiting from a group dedicated to the elderly while he was making $160,000 as an MP.

"He went and took a $20,000 check from a group of seniors trying to do a fundraiser to buy furniture," Kenney said.

Kate Monette, a Trudeau spokeswoman, said Grace had said it was happy with the event. 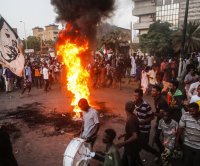 World News // 10 hours ago
African Union suspends Sudan; World Bank pauses funds over coup
Oct. 27 (UPI) -- Resistance and condemnation of the military coup of Sudan grew at home and abroad on Wednesday as the African Union suspended the country's membership and protests continued within its borders.

World News // 15 hours ago
Iran says it will resume nuclear talks
Oct. 27 (UPI) -- Iran will resume talks on its nuclear program in November, the country's top nuclear negotiator said Wednesday, but it's unclear if the United States will participate.

World News // 1 day ago
Fuel price surge hits Lebanon, worsening struggle for food, transport
BEIRUT, Lebanon, Oct. 26 (UPI) -- A new spike in fuel prices in Lebanon is spurred by the inability of the central bank to provide hard currency for fuel imports, the national currency in free-fall again and the rise in global oil prices.
Advertisement