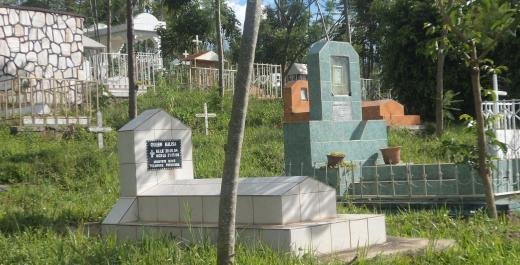 KIGALI, Rwanda (GPI)-- Rwanda’s lone crematorium sits in Bugesera, a low-lying district in south-central Rwanda. Bipin Patel, 60, a businessman of Indian descent, helped to build the structure in 2005 along with his family and other members of the Indian community in Rwanda. But only five people have been cremated in Bugesera since the crematorium’s construction, Patel says. Of those people, two were of Chinese descent, two were of Indian descent, and one was European. No Rwandans have cremated their dead here. Patel says this is curious to him, as Rwanda is a small country with a large population. Cremating the dead would free up land otherwise used for cemeteries. But Rwandans, who are primarily Christian, view the method as suitable only for the Hindu population, Patel says. He encourages Rwandans to be open-minded toward the practice. “The Rwandans have misconceptions about cremation, such as fears that it causes dangerous air pollution or takes too long,” he says. “But this is not true because the fumes from crematoriums are fumes like the ones from cooking places.” Cremation is also efficient, he says. “It doesn’t take a lot of time,” he says. “It takes between one and two hours. It depends on the method used.” The need to formally regulate cremation came before Parliament when constituents of Indian descent expressed a wish to practice it, says Ignacienne Nyirarukundo, the deputy chairwoman of the Chamber of Deputies’ Committee on Social Affairs. Parliament amended the country’s law in November 2012 regulating the organization and operation of cemeteries. The law now includes cremation as a legally regulated form of interment. Rwandan district councils now have the authority to reserve land for crematoriums and to regulate cremation, according to Article 34 of the law. Cremation may help conserve land in Rwanda, a small country with a growing population. Rwanda’s population density has increased by nearly 30 percent in the last 10 years, according to the provisional results of the 2012 Population and Housing Census conducted by the National Institute of Statistics of Rwanda. This makes Rwanda the most densely populated country in East Africa. Land available for cemeteries is decreasing throughout the country. Some burial grounds, such as Kigali’s Remera Cemetery, are closed to additional burials. Yet cremation holds little appeal to Rwandans. In Kigali, Rwanda’s capital, some locals say it is a sin to cremate the body of a loved one. Others say the act of cremation mocks the dead. Religious beliefs often form the basis of resistance to cremation. Simon Mwumvaneza, 51, a Christian preacher in Kigali, says cremation is in direct opposition to the Bible. A human body has value, he says. The Bible states that dust from earth created man, and man returns to the earth after death. Cremation interferes with this process, defying the Bible’s regulations on the burial ceremonies of Christians. Germain Sangano, a pastor at Restoration Church Kigali, agrees that cremation opposes Christian doctrine. “When you practice cremation, it shows you don’t have respect for dead bodies,” he says, “and you oppose God’s word that says that man is from dust to dust.” Patrick Ndayisabye, a 30-year-old businessman in Kigali, says he is skeptical of cremation as a form of interment. He is concerned about the negative impact of smoke on the environment. “Cremating a human body is inhuman,” he says. “And I believe the smoke from it must be harmful to the atmosphere.” But not all Rwandans oppose cremation. Diane Mushimiyimana, a student at the National University of Rwanda, says she is in favor of cremation. Rwanda is a small country with a large population, and cremation would help conserve the country’s land. Nyirarukundo agrees. She also says the new law does not force people to cremate but offers them a choice. Families can choose the form of interment that they prefer for their loved ones. Councilors in Kicukiro district in Kigali province have provided land to build Rwanda’s next crematorium, Nyirarukundo says. In the future, more local leaders will decide whether to construct crematoriums depending on the interest of their constituents.

World News // 2 hours ago
Elian Gonzalez nominated for seat in Cuba's National Assembly
Feb. 8 (UPI) -- Elian Gonzalez garnered international attention as the 6-year-old Cuban boy at the center of a custody battle, but his next chapter could be as a lawmaker.

World News // 10 hours ago
China: Biden's SOTU comments 'not conducive to building trust' amid tensions
Feb. 8 (UPI) -- China's foreign ministry spokesperson Mao Ning hit back at President Joe Biden Wednesday for comments during his State of The Union address that she implied sought to drive division between the two countries.