MOSCOW, June 6 (UPI) -- Russian President Vladimir Putin and his wife, Lyudmila, said on national television Thursday they are divorcing after more than 29 years of marriage.

In the couple's first public appearance together since Putin was inaugurated in May 2012, the couple spoke in an interview after attending a ballet in Moscow, RIA Novosti reported.

The president and his wife said the divorce was brought about by the demands of his work.

"All my activity, all [my] work is connected to being in the public eye," he said. "Some people like this, some don't, but there are people who are completely incompatible with this."

Lyudmila Putin said she dislikes "life in the public eye and air travel is very difficult for me. And we hardly see each other."

She said the decision was mutual and told a reporter "you could say this is a civilized divorce."

The couple, who are parents of two adult daughters, said the family is still close, RIA Novosti said.

"Lyudmila Alexandrovna and I will always remain very close, I'm sure of it, forever," Vladimir Putin said. 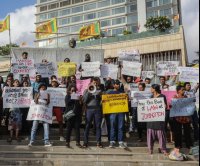 World News // 7 hours ago
Sri Lanka, facing dire economic crisis, defaults on debts for first time in its history
May 20 (UPI) -- For the first time in Sri Lanka's history, the economically ailing nation has defaulted on its debts amid an ongoing financial and political crisis exacerbated by the Ukrainian war and COVID-19 pandemic.

World News // 7 hours ago
Euro moves closer to parity with dollar
May 20 (UPI) -- As Russia's attack on Ukraine rages on and the world still grapples with COVID-19, a recent slide in the value of the euro has brought it near parity with the U.S. dollar, the latest market figures revealed.
Advertisement