Netherlands queen abdicates in favor of her eldest son

The ceremony took place in a 15th century church in Amsterdam next to the royal palace where thousands of cheering subjects waited to greet their new monarch.

Willem-Alexander, 46, became the Netherlands first king in 123 years, and his 9-year-old daughter Catharine-Amalia is now the heir to the throne, DutchNews.nl reported.

Thousands of cheering fans waited outside the palace for the royal family to appear on the balcony.

The new king, his queen Maxima and their three daughters waved at the crowd after being presented by Queen Beatrix, The Guardian reported.

In her farewell address, Queen Beatrix thanked the nation for its support.

"Without your heartwarming and encouraging displays of affection, the burdens, which certainly have existed, would have weighed heavily," the queen said.

She said her son is "ready in every way" to assume the largely ceremonial job of monarch, The New York Times reported.

"Monarchy is what unites us and makes us Dutch," one fervent royalist told the Times. "Politicians just fight each other." 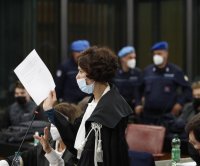