Hamad said Tuesday that Qatar would contribute $250 million to the fund and encouraged other Arab leaders to give to the fund, which he proposed should be managed by the Islamic Development Bank, the Gulf News reported.

The emir didn't explicitly lay out plans on how to use the funds but said the Arab heritage of Jerusalem -- called Al-Quds by Arabs -- is under threat because of Israeli claims on the city, The New York Times reported.

"There will be no peace before we find a just, permanent and comprehensive solution that meets all the legitimate rights of the Palestinians, primarily through the establishment of an independent state, with Al-Quds being its capital," Hamad said.

He also proposed a smaller meeting to convene in Egypt to discuss reconciliation between the Fatah and Hamas political factions and the formation of a Palestinian transitional government, the Times reported.

"There is no history of Jerusalem without Jewish history," he said. "To deprive Jerusalem of its Jewish foundations would be like depriving Mecca of its Islamic foundations, which would be absurd." 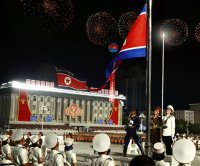 World News // 22 hours ago
North Korea expected to resume trade at China border, research says
March 3 (UPI) -- North Korea could be resuming low volumes of trade with the outside world as early as April.