MAIDUGURI, Nigeria, March 20 (UPI) -- The leader of Boko Haram said the Islamic sect will not release its French hostages until detained women and children from its members' families are freed.

"We are holding them [the hostages] in custody because the leaders of Cameroon and Nigeria have also detained our brethren with women and children under dehumanizing condition. It is against every rules of engagement to hold women and children as prisoners of war," said Ibn Abubakar Shekau, the leader of Boko Haram.

"Anybody that is found standing against our religion should know that it is not a difficult task for us to die defending it. That is the pronouncement from me in my capacity as leader," Shekau said. 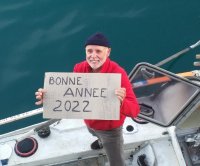 World News // 12 hours ago
French adventurer, 75, dies while rowing across Atlantic Ocean
Jan. 23 (UPI) -- Jean-Jacques Savin had activated two beacons on Friday to alert his team that he was experiencing "great difficulty" before losing contact with them.