He said the intervention would last "as long as necessary," the BBC reported.

Journalists had been unable to confirm reports earlier Friday foreign troops and weapons began arriving in Mali Thursday to reinforce government troops. It was unclear from what country they had come.

Hollande said earlier Friday France was willing to help fight Islamist militants in Mali but only with the approval of the United Nations.

In a speech, the French president said the Islamists' advance through northern Mali was "blatant aggression that is threatening Mali's very existence," Voice of America reported.

He said France's aid would be delivered "strictly within the framework" of a resolution by the U.N. Security Council.

On Thursday, the Security Council called for "rapid deployment" of West African forces to aid the Malian government.

The council's emergency meeting was called after about 1,200 Islamist forces took control of the town of Konna, less than 16 miles from Mopti, the northernmost city controlled by the Mali government. 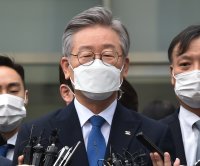 World News // 4 hours ago
Populist governor in South Korea seen leading in presidential poll
April 22 (UPI) -- A politician once dubbed the Bernie Sanders of South Korea is holding a slight lead in a new poll ahead of the country's presidential election in 2022.