In this photo released by the Syrian official news agency SANA, rubble is shown at the scene where multiple bombs explosions hit the center of Aleppo, Syria on October 3, 2012. UPI | License Photo

CAIRO, Oct. 24 (UPI) -- A tentative cease-fire pact between Syria and rebel fighters was announced Wednesday by envoy Lakhdar Brahimi amid questions about how it would be enforced.

Brahimi wants the temporary truce to be in place during the Islamic Id al-Adha feast that begins Friday, The New York Times reported.

The envoy, who represents both the United Nations and Arab League, said in Cairo Syria was preparing to announce the cease-fire and most rebel factions he had contacted said they would respect it as well.

Syrian state television said an announcement about the truce would be made Thursday.

How the truce will be enforced is uncertain. U.N. observers were pulled out last year and it isn't likely a peacekeeping force could be assembled in 48 hours.

Rebel leaders said in various statements they doubted the cease-fire would hold. They said Syria would agree to a cease-fire only to gain time to regroup against rebel forces. Commanders noted government forces were shelling rebel bases and civilians in cities around the country.

Some commanders said they would honor the cease-fire if other conditions were met, such as releasing prisoners held as rebels and lifting sieges around major cities.

Meanwhile, rebels and government forces blamed one another for what the government called a "massacre" in Douma, a Damascus suburb, CNN reported.

World News // 13 hours ago
Parts of Australia to re-enter lockdown as COVID-19 cases surge
July 7 (UPI) -- Australian officials said Tuesday residents and businesses in Melbourne and other areas will soon re-enter a state of lockdown due to abrupt surges in COVID-19 cases. 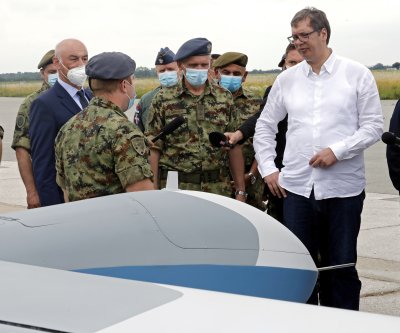 World News // 15 hours ago
Updated EU forecast projects greater declines in 2020 before rebound
July 7 (UPI) -- The European Commission on Tuesday updated its economic forecast for the rest of 2020 and 2021, which mostly projects steeper declines across the 27-member bloc.