Arye Fishbein, the former head of Israel's air defense command, told Army Radio the long distance control capabilities needed to carry out such a mission are a sign of Hezbollah's progress.

"We are familiar with this aircraft and its capabilities. ... The payload can be either a camera or a small bomb," he said.

No group has claimed responsibility for dispatching the drone that flew into Israel Saturday morning.

Israeli media reports quoted unnamed security officials saying the military establishment was examining the possibility the drone was a joint Hezbollah-Iranian operation to survey the Dimona nuclear facility, which foreign reports say is the site of Israel's nuclear weapons program.

"As far as I understand this drone could not have collected intelligence that could not be obtained through Google Earth or other methods," Benny Lavie, former commander of an Air Force drone unit, told Israel's Channel 10.

The drone took a circuitous route over the Mediterranean Sea around Israel's territorial waters before turning east and flying over Gaza into Israel, the Hebrew daily Maariv said.

It was spotted by Israel before it entered its territory and flew some 20 minutes in the air before it was shot down in the southern Hebron Hills at the edge of the Negev, in an unpopulated area, the paper said.

The site of the crash was cordoned off by the Israeli Army, which sent special teams to collect the fragments of the drone for inspection.

Prime Minister Binyamin Netanyahu said Saturday night Israel "will continue to defend our borders at sea, on the land and in the air, for the security of Israeli citizens," Maariv said.

World News // 2 hours ago
Egypt, Gaza reopen border for three days
Nov. 24 (UPI) -- Egypt on Tuesday temporarily opened its border with Gaza for the first time since blocking access during the beginning of the COVID-19 pandemic.

World News // 11 hours ago
Viruses related to coronavirus found in Japan, Cambodia bat samples
Nov. 24 (UPI) -- Scientists in Cambodia and Japan have found coronaviruses in bats related to SARS-CoV-2, as countries around the world experience a resurgence of COVID-19 cases. 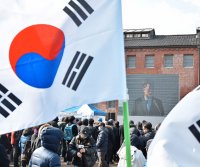