ISTANBUL, Turkey, Oct. 5 (UPI) -- About 33 relatives of nine Turkish activists who were killed during a 2010 Israeli raid on an aid ship off Gaza filed a lawsuit against Israel Friday.

They are seeking compensation of more than $5.5 million and an apology from Israel, Hurriyet Daily News reported.

Israeli forces killed the activists aboard the Mavi Marmara May 31, 2010.

The incident marked a low point in diplomatic relations between Israel and Turkey, observers said.

Turkey has Israel must apologize, compensate families of the victims and lift its naval blockade on the Gaza Strip to restore normal ties between the two countries. 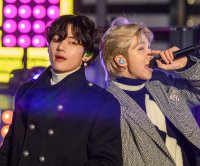 World News // 1 hour ago
German radio host under fire for calling K-pop's BTS 'crappy virus'
Feb. 26 (UPI) -- A German radio host is being accused of racism after suggesting the chart-topping musicians be exiled to North Korea.

World News // 11 hours ago
EU expels Venezuelan ambassador from bloc in sanctions rift
Feb. 25 (UPI) -- Member states of the European Union agreed on Thursday to expel the Venezuela ambassador from the intergovernmental body.