The critically injured man was hospitalized in Rafah, near where the airstrike occurred.

The Interior Ministry said the two deceased were on official business concerning securing the Gaza-Egypt border.

The ministry said the airstrike was an indication that Israel planned to initiate wide-scale operations in Gaza, Ma'an said.

The Israeli military said in a statement, Israel "will not tolerate any attempt by terrorist groups to harm" Israeli civilians and soldiers and would "operate with strength and determination against those who use terror against the state of Israel."

World News // 2 hours ago
U.N., Saudi Arabia raise $1.35B in Yemen humanitarian funds
June 3 (UPI) -- Donors have pledged $1.3 billion for aid in war-torn Yemen but the total was well below the $2.4 billion the United Nations aimed to raise. 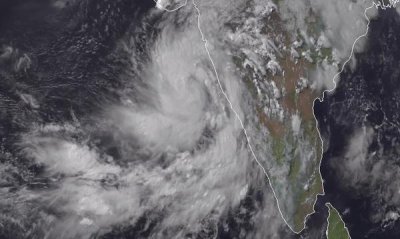 World News // 3 hours ago
Cyclone Nisarga makes rare landfall in western India
June 3 -- Cyclonic Storm Nisarga formed Tuesday in the Arabian Sea and is aiming for at the west India coastline and Mumbai, the country's financial center and home to more than 18 million people.

World News // 4 hours ago
U.N. chief calls for protection of migrants, refugees amid pandemic
June 3 (UPI) -- U.N. Secretary-General Antonio Guterres on Wednesday called for increased protections for migrants and refugees amid the coronavirus pandemic, reminding countries of their obligations to people on the move.

World News // 10 hours ago
U.S. accepts $200M proposal for furloughed USFK employees
SEOUL, June 2 (UPI) -- The Pentagon said Tuesday it's accepted a $200 million proposal from South Korea to fund labor costs for Korean employees of United States Forces Korea, a move that comes as cost-sharing negotiations are at an impasse.

World News // 1 day ago
Acquitted scientist returns to Iran after years in U.S. prison
June 2 (UPI) -- An Iranian scientist held in the United States for months after he was acquitted in a trade secrets case has been deported and sent back to Iran, officials in Tehran said Tuesday.