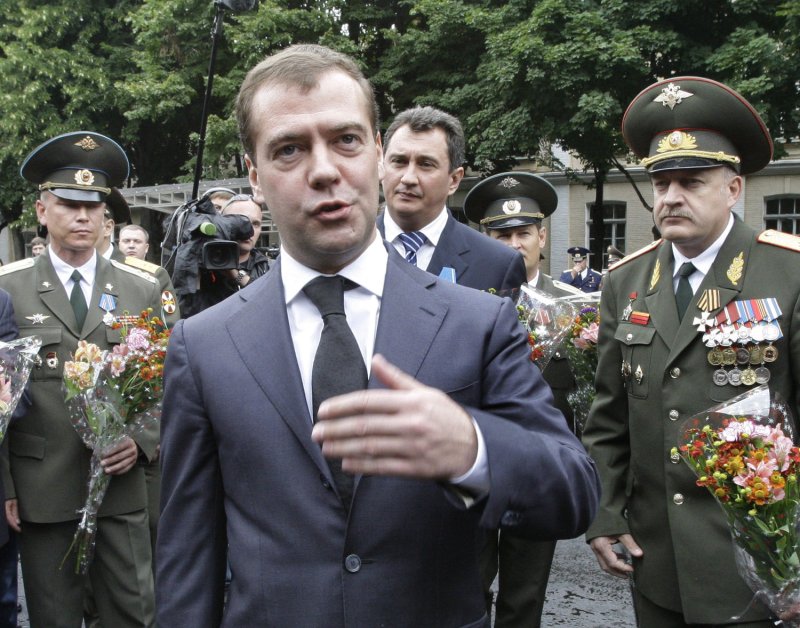 Russian President Dmitry Medvedev talks to the media after an award ceremony at the headquarters of Russian 58th Army in Vladikavkaz, the capital of North Ossetia province on August 8, 2009. Medvedev awarded medals to Russian militaries who fought in the war against Georgia a year ago. (UPI Photo/Anatoli Zhdanov) | License Photo

Medvedev, Russia's current prime minister who was president during the Aug. 7-11, 2008, war with Georgia over the breakaway region of South Ossetia, said the "decision [to send the army to Georgia] was taken on time, quickly enough, we managed to avoid significantly bigger losses."

"I managed to take the decision that restored balance and brought peace," The Moscow Times said news reports quoted Medvedev as saying in the South Ossetia capital, Tskhinvali.

"All the decisions were made exactly when they had to be made. I made the decision 2 1/2 hours after the start of the Georgian assault. Not too soon, because it would have been wrong as I dealt with the deployment of the Russian armed forces on the territory of the foreign state, but not too late either. Those who say otherwise are either ignorant or are distorting the real facts on purpose," RIA Novosti quoted Medvedev as saying.

The comments were in response to a film recently uploaded to YouTube in which former Russian generals say Medvedev's indecision led to the unnecessary loss of life.

"I am convinced, until there was a kick from Vladimir Vladimirovich in Beijing, everyone here, to put it mildly, was afraid of something," former chief of the General Staff Yury Baluyevsky says in the video, titled "The Lost Day" and headlined "Medvedev's Cowardice Killed 1,000 People."

Baluyevsky was referring to Vladimir Putin, Russia's current president who was representing Russia as prime minister during the 2008 Olympic Games.

Medvedev fired Baluyevsky two months before the conflict amid reports of disagreements with Defense Minister Anatoly Serdyukov, the Times said.

Putin told RIA Novosti Wednesday he spoke with Medvedev from Beijing, contradicting Medvedev's earlier statements that he had not spoken to Putin for an entire day after ordering the army into South Ossetia, the newspaper said.

"I called Dmitry Anatolyevich twice, on Aug. 7 and 8, and the defense minister. We discussed the problem," a transcript on the Kremlin's Web site quoted Putin telling reporters.

Relations between Russia and Georgia have been non-existent since the war, with the countries' leaders not on speaking terms. Georgian President Mikheil Saakashvili Wednesday used the anniversary of the war to say South Ossetia would be liberated "in a short time," accusing the Kremlin of planning to take over all of Georgia.

"No matter how much our invaders and their local stooges may dream about it, the Soviet Union will not be restored," Civil.ge reported Saakashvili said in a televised address.

World News // 1 hour ago
Elian Gonzalez nominated for seat in Cuba's National Assembly
Feb. 8 (UPI) -- Elian Gonzalez garnered international attention as the 6-year-old Cuban boy at the center of a custody battle, but his next chapter could be as a lawmaker.

World News // 9 hours ago
China: Biden's SOTU comments 'not conducive to building trust' amid tensions
Feb. 8 (UPI) -- China's foreign ministry spokesperson Mao Ning hit back at President Joe Biden Wednesday for comments during his State of The Union address that she implied sought to drive division between the two countries.