Officials said the insurgents set off car bombs, rushed a military base and ambushed checkpoints in the single most bloody day of 2012 so far, The New York Times reported.

The offensive started on the third day of the Islamic holy month of Ramadan and a day after an audio message attributed to al-Qaida in Iraq pledged to conduct a new offensive, called "Breaking Down Walls," the Times said.

"We are returning again to dominate territories we used to dominate, as well as more," the statement said.

"There's no question that Iraq remains a violent place and we strongly condemn the attacks in Iraq," White House spokesman Jay Carney said during the daily briefing.

However, Carney said Iraqi forces have been trained "and do have the capacity to handle their own security."

One of the hardest hit areas was Taji, a Sunni community about 12 miles north of Baghdad where at least 24 people were killed.

RELATED Another deadly day in Iraq

The attacks began when gunmen stormed an Iraqi military base near Duluiya and killed 15 Iraqi soldiers, the Times said.

After the initial attack, car bombs were detonated in other Iraqi communities and Baghdad neighborhoods, police, hospital and Iraqi Army officials told the Times.

In Diyala province, a motorcycle carrying a bomb exploded at an outdoor market in Muqdadiyah, killing two people and wounding 11, officials said.

"I think al-Qaida in Iraq made a big joke of the government and the Iraqi security forces," Khalid Fadel, a military analyst and former instructor at the Iraqi Military College, told the Times. "They were so clear that they were going to launch attacks during Ramadan, and the government said that they have information of about 30 terrorist groups entering the country, but still the security forces are unable to prevent the attacks."

The U.N. mission in Iraq also condemned the wave of attacks.

"I strongly condemn the heinous attacks and the senseless violence and bloodshed across the country," Gyorgy Busztin, the secretary-general's deputy special representative, in a release from the U.N. Assistance Mission for Iraq. "The scale and brutality of the attacks are appalling -- especially now, when Iraqis are not only celebrating the holy month of Ramadan, with its messages of peace and reconciliation, but are also welcoming thousands of returnees who have fled the ongoing violence in Syria."

World News // 28 minutes ago
EU expels Venezuelan ambassador from bloc in sanctions rift
Feb. 25 (UPI) -- Member states of the European Union agreed on Thursday to expel the Venezuela ambassador from the intergovernmental body. 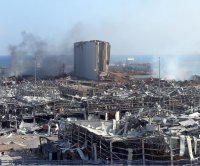