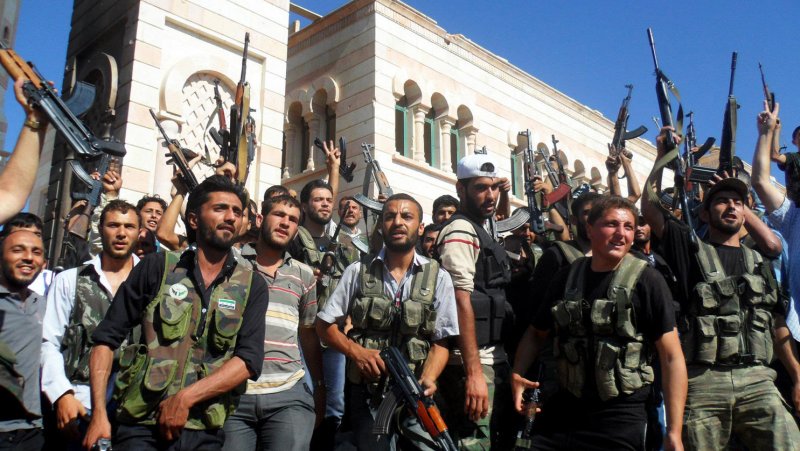 Members of the Free Syrian Army chant slogans against Syrian President Bashar al-Assad in Aleppo as they celebrate one day after the Syrian defense minister was killed in an attack in Damascus in Aleppo in Syria on July 19, 2012. UPI/Khaled Tallawy | License Photo

Ikhtiar is the fourth key person in President Bashar Assad's regime to die as a result of the attack on the national security offices Wednesday, the BBC reported.

Fighting was reported across Syria Friday, with rebels seizing several border posts. Activists said the posts along Syria's southern border with Iraq and the country's northern border with Turkey were under rebel control Friday.

The bombing of the National Security Bureau came shortly after rebels declared an assault on the capital, Operation Damascus Volcano.

The state-run Syrian Arab News Agency's Web site has been inaccessible since at least early Thursday.

Seventy-seven deaths were reported in and around Damascus, followed by 42 in Idlib, 21 in Homs, 20 in Deir Ezzor, 15 in Aleppo, 14 each in Hama and Daraa, and 1 in Lattakia.

The deaths in the Damascus area were mainly from sniper fire and "indiscriminate mortar shelling," the report said.

The rights organizations said a 3-year-old child was killed in a car bomb near Damascus International Airport. The list of the dead also included several teenagers.

Meanwhile, Russia's ambassador to France touched off controversy in Damascus after he suggested Assad was ready to step down. Alexander Orlov said Assad effectively agreed to step down last month during a conference in Geneva, Switzerland, on resolving the crisis in Syria and planning for the country's democratic transition.

"Assad nominated his representative to lead the negotiations with the opposition for this transition. That means he accepted to leave, but in a civilized way," Orlov said.

His comments prompted an angry response from Syria, where the Information Ministry said the claims were bogus and baseless.

One of the two crossings to Turkey captured by opposition fighters is at Bab al-Hawa, gateway to northwestern Syria's Idlib province, opposition leaders said and video posted online indicated.

"Idlib province will be Syria's Benghazi," an opposition activist told the British newspaper The Guardian -- referring to Libya's second-largest city, which was the temporary capital of the Libyan rebel National Transitional Council during its successful ouster of Libyan leader Moammar Gadhafi last year.

The Syrian military said its determination to "clear the homeland of the armed terrorist groups" -- the term it uses for insurgents seeking Assad's ouster -- had been fortified by the rebel bombing Wednesday.

The Lebanese minister of social affairs said 4,500 cars crossed into the country at the border crossing on the highway from Damascus.

Israel put its military on alert to stop refugees crossing into its territory.

Iraqi residents of Damascus fled the city in the other direction to the Iraqi border.

More than 1,000 made their way into Iraq, but many others were unable to cross the rebel-controlled border due to heavy clashes that led Iraqi authorities to tighten border security, a top Iraqi official said.

Baghdad said in a statement on state TV it would send planes to Damascus to bring Iraqis -- many of whom fled the war in Iraq -- back home.

World News // 19 minutes ago
Quote from Beijing official on '5 years' of COVID-19 restrictions causes stir
June 27 (UPI) -- Residents of Beijing reacted with confusion and alarm Monday when a top Communist Party official was quoted in official media saying strict COVID-19 policies could be in place for five years.

World News // 5 hours ago
WNBA's Brittany Griner appears briefly in Russian court
June 27 (UPI) -- WNBA star Brittney Griner appeared briefly during a closed-door preliminary hearing with a new appearance set for July 1 but no other movement in her case since being initially detained on Feb. 17.

World News // 2 hours ago
Ancient Israeli mosaic returns home after years touring the world
June 27 (UPI) -- An ancient mosaic discovered in Israel more than 25 years ago, is now back in that country and went on display Monday after years spent touring prestigious museums around the world.

World News // 5 hours ago
Zelensky tells G7 leaders Ukraine needs help to end Russia war by year's end
June 27 (UPI) -- Ukrainian President Volodymyr Zelensky called on G7 leaders to make a major push to end Russia's invasion of Ukraine by the end of the year in a virtual address at the group's meeting on Monday.

World News // 6 hours ago
Russia forces build on their success in Severodonetsk in attacks on Lysychansk
June 27 (UPI) -- Luhansk region officials are urging citizens in Lysychansk to evacuate on Monday with the Russian military advancing on the last remaining city still under Ukrainian control in the region.
Advertisement