In this image taken from AL-jazeera TV, newly-elect President Mohammed Morsi delivers a speech in Cairo, Egypt, Sunday, June 24, 2012. Morsi has called for unity and said he carries "a message of peace" to the world in his first televised speech on state TV. UPI | License Photo

Shafiq released a statement congratulating the victor, Mohamed Morsi, and urging him to govern as president of all Egyptians, Egypt Independent reported. Attorney Showee Elsayed told CNN Shafiq, who flew to Abu Dhabi, was not fleeing to avoid prosecution.

On Monday, an adviser said Morsi, the Muslim Brotherhood candidate who won a narrow victory, plans to name a woman and a Christian as vice-presidents.

In an interview with CNN, Ahmed Deif, Morsi's policy adviser, promised Egypt will not become an "Islamic Republic" like Iran. He said Morsi's plans for his vice presidents are proof of that.

RELATED Obama urges Morsi to 'reach out to all'

Shafiq plans to start a new political party when he returns, his lawyer said.

"We trust that nobody will be marginalized and that there will be no settlement of scores. I respect the opinion of the majority and appreciate everyone who supported me. I thank them one by one," Shafiq said in a statement.

Elsayed told CNN Shafiq was on a private trip that will include a religious pilgrimage to Mecca with his daughters.

Shafiq had been barred from leaving the country to face charges of corruption during his tenure as civil aviation minister. He is accused of wasting billions of public dollars as well as embezzling $800 million, bikyamasr.com said.

The spokesman told the official Middle East News Agency Monday claims by Fars that it had interviewed Morsi hours before he was officially elected were false.

"Morsi did not give any interview to Fars and everything this agency has published is baseless," the spokesman told the agency.

The Iranian news agency claimed Morsi was considering expanding ties with Tehran and planned to review the 1979 peace treaty with Israel.

The Abu Dhabi daily The National said Tuesday Morsi faces daunting challenges, from the economy to writing a new constitution. After he was elected president, Morsi officially resigned from the Muslim Brotherhood, the newspaper said.

One of the main tasks ahead for the president is dealing with the Supreme Council of Armed Forces, which dissolved Parliament and stripped powers from the presidency, including taking control of the committee that will rewrite the constitution, the daily said. Egypt's highest court overturned a decree Tuesday allowing the military to make civilian arrests and plans to rule soon on other important issues.

"The deck is stacked against him, but I certainly don't think it will stay that way," Eric Trager, a fellow with the Washington Institute for Near East Policy in Cairo, told the newspaper. "Even if he doesn't have formal power for a while -- and I don't think that will last long -- he'll still be able to use the bully pulpit in a very influential way."

World News // 7 hours ago
Apple, Ireland win appeal of EU's demand for $15B in back taxes
July 15 (UPI) -- Ireland did not give U.S.-based tech giant Apple any unfair state aid, the European Union's second-highest court ruled Wednesday, nullifying the EU's demand for nearly $15 billion in back taxes. 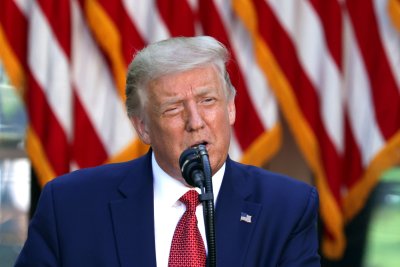