BERLIN, June 7 (UPI) -- Europe has weeks to save the euro and must create an "immediate" rescue plan, the United States and Britain plan to tell Germany Thursday, Britain said.

British Prime Minister David Cameron was to tell German Chancellor Angela Merkel in Berlin Thursday he and U.S. President Barack Obama believe an authoritative agreement that fully gets the job done must be reached this month -- and there are two crucial summits in which to do it, officials said.

Those meetings are the Group of 20 summit in Los Cabos, Mexico, June 18-19 -- when Obama, Cameron, Merkel and other leaders of 19 major-economy countries and the European Union get together -- and an EU leaders summit in Brussels June 28-29.

RELATED White House: New moves ahead to save euro

The United Nations weighed in on the crisis Thursday, issuing a report that said the austerity budgets across the continent meant to reign in government debt "are backfiring."

"An escalation of the crisis could result in severe turmoil in financial markets and a sharp rise in global risk aversion, leading to a further weakening of global growth," said the U.N. World Economic Situation and Prospects 2012 mid-year update.

"The severe fiscal austerity programs implemented in many European countries, combined with mildly contractionary policies in others, such as Germany and France, carry the risk of creating a vicious downward spiral with enormous economic and social costs," the U.N. report said.

Critically, the G20 summit will take place a day after Greek elections that could push Greece closer to dropping out of the eurozone if voters choose a government that repudiates Greece's debts or is unwilling to accept international lenders' further austerity measures to qualify for more aid, analysts say.

Downing Street said Cameron and Obama agreed in a phone call Tuesday on the critical need for direct action.

"They agreed on the need for an immediate plan to tackle the crisis and to restore market confidence as well as a longer-term strategy to ensure a strong single currency," a Cameron spokeswoman said Wednesday.

Cameron has caused some irritation in Berlin and Paris by appearing to lecture eurozone leaders on actions he says they need to take to save the single currency, the British newspaper The Guardian reported.

Britain is an EU member but is not part of the 17-country eurozone and does not use the euro as its currency.

White House spokesman Jay Carney said Wednesday: "Our view is the Europeans have the capacity to act. They have taken some important steps, but more needs to be done."

Some market analysts had said they thought the eurozone central bank would lower the interest rate to make money easier to come by.

"Some of these problems in the euro area have nothing to do with monetary policy ... and I don't think it would be right for monetary policy to fill other institutions' lack of action," Draghi said in explaining why the bank left the rate unchanged.

Cameron's meeting with Merkel was to take place the same day Spain faced a big test on the bond markets as it tried to raise more than $2.5 billion at a debt auction.

Spanish Finance Minister Cristobal Montoro confessed Tuesday Spain was close to no longer being able to raise money on the bond markets due to lack of investor confidence, due to Spain's banking crisis.

"The market is no longer open," he said.

German and EU officials were working on plans to inject cash into Spain's stricken banking sector, and are also considering a possible national Spanish bailout that would impose only "very limited conditionality" on Madrid, officials said.

Spain is trying to persuade its European partners to allow the European bailout fund to inject capital directly into its banks, rather than diverting the money through the state. Direct payment to banks is against EU rules, which permit bailout money to be given only to national governments.

The other alternative -- a contingency bailout strategy -- would be an "austerity-lite" bailout, not forcing on Spain the type of draconian austerity measures imposed in the Greek and Portuguese bailouts, officials in Brussels told several newspapers.

The bailout contingency -- designed to restore market confidence in Spain quickly -- would require few austerity measures beyond reforms already agreed to with the EU, and could even forgo the close monitoring by international lenders that has caused strife in Athens, the Financial Times reported.

The EU separately proposed legislation for dealing with failing banks that would seek to shift the cost of future bank collapses away from taxpayers and onto bank shareholders and even bank creditors.

"The financial crisis has cost taxpayers a lot of money," said Michel Barnier, the European commissioner in charge of financial regulation.

"We must equip public authorities so that they can deal adequately with future bank crises," he said. "Otherwise citizens will once again be left to pay the bill, while the rescued banks continue as before knowing that they will be bailed out again."

World News // 34 minutes ago
Sanctions on North Korea effective despite illicit activity, analyst says
April 13 (UPI) -- North Korea's methods of evading sanctions have not been enough to offset their impact, according to a new study. 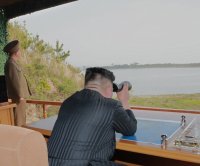