90 killed, many children, in Syria attack

DAMASCUS, Syria, May 26 (UPI) -- At least 90 people, many of them children, were killed in a town in the restive province of Homs in Syria in an attack by government forces, activists said.

"This appalling and brutal crime involving indiscriminate and disproportionate use of force is a flagrant violation of international law and of the commitments of the Syrian Government to cease the use of heavy weapons in population centers and violence in all its forms," the statement said. "Those responsible for perpetrating this crime must be held to account."

U.S. Secretary of State Hillary Clinton said "the international community" would step up pressure on "Assad and his cronies, whose rule by murder and fear must come to an end."

The attack in Houla prompted opposition activists to plead for international help in stopping the government attacks, CNN reported.

The Syrian Network for Human Rights reported Saturday government forces opened fire on international observers in Al-Quseir, Homs, to prevent them from getting to the area, and the observers returned to their hotels.

"We in the Local Coordination Committees are pained by the international community's apparent blindness to the bloodshed, and believe the United Nations Security Council bears the responsibility for its inability to protect Syrian civilians," the group said.

"It's unbelievable that we have 7 billion people on this planet, and they all can't do anything about what they are seeing on TV," activist Abu Emad told CNN.

"Do something," he said in a plea to the international community.

The LCC said most of those killed in Houla were women and children.

Activists said security forces had killed entire families, some in heavy shelling, others who were caught and summarily executed, the BBC reported.

Six members of one family were killed when their house was shelled, the Syrian Observatory for Human Rights said.

The Daily Telegraph said footage posted online shows bodies of civilians, many of them children, lying on a floor, some covered with blankets.

"There are continuing reports of a stepped-up security crackdown by the authorities that has led to massive violations of humans rights by government forces and pro-government militias, including arbitrary arrests, torture, enforced disappearance and summary execution of activists, opponents and defectors," Ban wrote in a letter to the U.N. Security Council.

He acknowledged U.N. observers had not stopped the violence.

The Syrian government said 16 people had been killed by "terrorists" Friday but did not mention violence in Houla.

The government routinely blames outside terrorists for violence in the country.

The United Nations says at least 10,000 people have been killed since the uprising against President Bashar Assad began in March 2011. 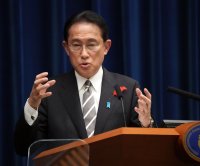 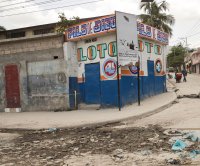 World News // 13 hours ago
Gang members abduct American missionaries, children in Haiti
Oct. 17 (UPI) -- Seventeen people, including 12 adult missionaries and five children, mostly from the United States, were abducted by gang members after they they left an orphanage in Port-au-Prince, Haitian authorities said.