LONDON, May 11 (UPI) -- A former executive with Rupert Murdoch's British newspaper subsidiary testified in a judicial inquiry into press ethics arising from a phone-hacking scandal.

Brooks edited the defunct News of the World Sunday tabloid from 2000 to 2003 and The Sun before becoming chief executive officer of News International, the British newspaper subsidiary of Murdoch's News Corp. News of the World folded after phone-hacking scandal broke, engulfing the tabloid, its reporting and executive staff and others.

Brooks was one of the more than 40 people arrested and questioned by the police.

She told the inquiry lead counsel Robert Jay the relationship with Blair had been "friendly."

But, she said, she did not exchange texts or e-mails with Blair because "he did not have a mobile phone or in fact, I think, use a computer when he was prime minister," the BBC reported.

She said she and husband Charlie Brooks owned a mansion 3 miles from Cameron's home and the couples were members of a group of powerful people who spent weekends together, the Times said.

British media reported a soon-to-be-published biography on Cameron said Cameron texted Rebekah Brooks during the week she resigned from News International last summer, telling her "to keep her head up," but has had no contact since her resignation.

Testifying Friday, Brooks confirmed she had received a message along those lines through an unidentified third party, the Times said.

"I received some indirect messages from No. 10, No. 11, the Home Office, the Foreign Office," she said, referring to the Downing Street addresses of Cameron and Chancellor of the Exchequer George Osborne. 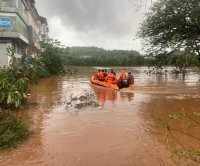