BEIJING, March 29 (UPI) -- A spokesman for the Chinese Foreign Ministry Thursday slammed the latest revisions to Japan's textbooks, which alter the death toll of the Nanking Massacre.

The revisions also claim the Diaoyu Islands as a Japanese territory. Sovereignty of the uninhabited islands has been disputed between China and Japan since 1971 when the United States relinquished control of them.

"The Diaoyu Islands and their affiliated isles have been an inherent part of Chinese territory since ancient times," said Foreign Ministry spokesman Hong Lei at a press conference Thursday.

The official Xinhua news agency reported the textbooks also deny the number of victims in the World War II Nanking Massacre, saying there is dispute on the exact number, but it may be 20,000 to 200,000.

The massacre, which occurred in December 1937, occurred during the Japanese occupation of Nanjing, also known as Nanking, China's then capital. China says Japanese soldiers killed more than 300,000 people during the occupation.

"We hope the Japanese side will treat this in the proper manner and properly handle historical issues with a sincere adherence to the principle of learning from history and facing the future," Hong said.

World News // 33 minutes ago
Italy rolls out Green Pass amid anti-COVID-19 mandate protests
Oct. 16 (UPI) -- Italy has rolled out its Green Pass, a government-issued health pass for citizens to work amid the pandemic, prompting protests.

World News // 22 hours ago
With 6 weeks to go, hurricane season may be all but over
While the Atlantic hurricane season does not officially end until Nov. 30, AccuWeather forecasters believe that the odds of any additional tropical storm formation in the near future are low.

World News // 23 hours ago
Russia says it blocked U.S. warship from entering its waters
Oct. 15 (UPI) -- The Russian Defense Ministry said it chased off a U.S. Navy destroyer about to violate the country's border near the Sea of Japan during joint Moscow-Beijing military drills. 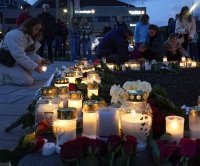