Iranian lawmakers surround President Mahmoud Ahmadinejad as he arrives to answer questions by members of parliament over his performance on political and economic issues Tehran, Iran on March 14, 2012. Ahmadinejad is the first president to face questions by parliament. UPI/Maryam Rahmanian. | License Photo

Iranian lawmakers talk before the arrival of President Mahmoud Ahmadinejad in Tehran, Iran on March 14, 2012. Ahmadinejad appeared in parliament to answer questions by MP's over his performance on political and economic issues. Ahmadinejad is the first president to face questions by parliament. UPI/Maryam Rahmanian. | License Photo

In the first such summons since Iran's 1979 revolution, Ali Motahari, a representative for lawmakers upset with Ahmadinejad's economic policies and ministerial choices, spoke for 15 minutes, posing questions to the president, CNN reported.

Ahmadinejad's hourlong response included saying he dismissed Foreign Minister Manouchehr Mottaki because he had gone on a mission without his permission.

Ahmadinejad in December appointed Ali Akbar Salehi, the head of the Atomic Energy Organization of Iran, as interim foreign minister.

He also said Parliament shouldn't begrudge him some rest, referring to his 11-day stay at home. Ahmadinejad took the extended absence after Supreme Leader Ali Khamenei overruled his decision to fire an intelligence minister, CNN said.

Motahari also objected to the forcing of women to wear headscarves, to which Ahmadinejad said: "Our nation is religious, pious and lovable and we must treat them right. Do not be too strict. Of course if some people try to systematically undermine values what must be done is clear. The Judiciary and intelligence organizations will investigate them and issue a verdict. But ordinary people must be treated with kindness."

The president repeatedly said: "I am joking with you. After all, it is the new year and we should be jovial," Iran's state-supported Press TV reported.

Ahmadinejad told lawmakers: "Be fair. Now that you want to rate, give a good mark. We answered the questions and said some extra things. It would be unfriendly and disrespectful if you give [me a mark] less than an A."

World News // 13 hours ago
Tropical Storm Nepartak forms east of Japan, could impact Tokyo Olympics
July 23 (UPI) -- The Olympic Games in Tokyo have already been postponed by an entire year due to the coronavirus pandemic, and now Tropical Storm Nepartak in the Philippine Sea could put some events at risk of being delayed again. 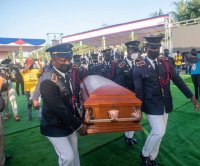 World News // 20 hours ago
Olympic COVID-19 cases in Tokyo top 100 as Summer Games begin
July 23 (UPI) -- The number of coronavirus cases connected with the Summer Olympics Games rose to more than 100 as competition began Friday, according to data provided by the Tokyo government.

World News // 23 hours ago
Woman in China dies after throwing baby to safety during deadly flood
July 23 (UPI) -- A woman who tossed her baby to safety when mudslides and floods struck her home in China's Henan Province was found dead, according to rescuers. 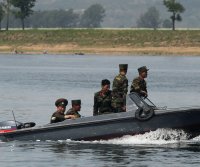