Foreign Minister Ahmet Davutoglu said he has talked with European Union foreign policy chief Catherine Ashton about his recent visit to Tehran and expects nuclear talks with Iran to resume as soon as possible.

"Both parties agreed in principle to hold talks in Turkey, and I hope negotiations will begin as soon as possible," Davutoglu said in an interview published Sunday in Japan's Nihon Keizai Shimbun newspaper, Today's Zaman reported Monday.

Davutoglu visited Tehran last week and delivered a Western offer to Iranian authorities to resume negotiations that had stalled a year ago.

Davutoglu said his Iranian counterpart Ali Akbar Salehi "responded in kind" and said Iran was ready to return to talks with major world powers at a time and place agreed on by both sides, Today's Zaman said.

World News // 15 hours ago
Foes, allies send fuel to ease crisis in Lebanon
BEIRUT, Lebanon, Sept. 17 (UPI) -- Fuel shipments have begun arriving in Lebanon, the efforts of foes and allies, to ease a shortage that has crippled life for months with limited electricity and gasoline.

World News // 14 hours ago
Islamic State-Khorasan a threat to Afghan civilians, Taliban
Sept. 17 (UPI) -- Who is Islamic State-Khorasan Province? Made up of defectors from other militant groups, it seeks to establish an Islamic caliphate and label those who reject Sharia law as apostates who can be executed as punishment. 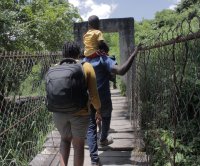