A Chinese magazine featuring Kim Jong Il with his father Kim Il Sung and son, Kim Jong Un. North Korean media reported that Jong-il had passed away at the age of 69 due to uncertain causes. UPI/Stephen Shaver | License Photo

Kim, who came to power after the death of his father and country founder Kim Il Sung, died at 8:30 a.m. Saturday "from a great mental and physical strain," the official Korean Central News Agency reported. The report said he died while on a train journey.

The office of the White House press secretary issued a statement saying the Obama administration was "closely monitoring" reports of Kim's death.

"The president has been notified, and we are in close touch with our allies in South Korea and Japan," the statement said. "We remain committed to stability on the Korean peninsula, and to the freedom and security of our allies."

In response to the announcement of Kim's death, the South Korean military declared an emergency alert, The Korean Times said.

China's Xinhua news agency quoted KCNA as saying Kim, who had received medical treatment for his cardiac and cerebrovascular diseases for a long period, suffered "an advanced acute myocardial infarction, complicated with a serious heart shock," on the train.

The report said every possible first-aid help was given but it failed to save Kim's life. The report said an autopsy Sunday "fully confirmed the diagnosis of his diseases."

Kim reportedly had been in ill heath since suffering an apparent stroke in 2008.

Under Kim's rule, North Korea undertook an ambitious nuclear weapons program which brought severe international sanctions on the impoverished country. The six-nation talks on North Korea's nuclear disarmament have stalled for the past three years after Pyongyang walked out following its second nuclear test and missile tests.

The state broadcaster said Kim died due to "overwork" after "dedicating his life to the people."

CNN reported there have been reported lately about Kim's health and about his son Kim Jong Un being groomed as his successor.

Yonhap reported South Korea had placed all its military units on emergency alert after news of Kim's death.

The country's joint chiefs of staff had also called an emergency meeting of officials handling crisis management and operations and that it is monitoring activities along the border along with the South Korea-U.S. Combined Forces Command.

World News // 4 hours ago
Russians vote to allow Putin to rule until 2036
July 2 (UPI) -- Russians overwhelming voted to pass constitutional amendments that could allow President Vladimir Putin to remain in power until 2036, according to preliminary results released Thursday. 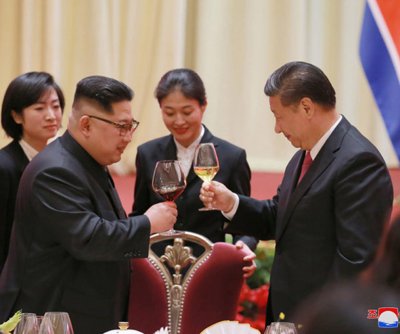