The recipients include Mohamed Bouazizi, who died after immolating himself in Tunisia in December, beginning the Arab Spring movement. Bouazizi is receiving a posthumous award.

"These individuals contributed to historic changes in the Arab world, and this award reaffirms Parliament's solidarity and firm support for their struggle for freedom, democracy and the end of authoritarian regimes," Parliament President Jerzy Buzek said in a statement Thursday.

Buzek called the Sakharov Prize "a symbol for all those working for dignity, democracy and fundamental rights in the Arab world and beyond."

Bouazizi, a 26-year-old Tunisian market trader, set himself on fire to protest repeated harassment by Tunisian authorities, leading to the ousting of President Zine el-Abidine Ben Ali and sparking the pro-democracy movement which swept across North Africa and the Middle East this year.

The other Sakharov Prize winners are Asmaa Mahfouz, an Egyptian activist and one of the founders of the April 6 Youth Movement; Ahmed al-Zubair Ahmed al-Sanusi, an activist who spent 31 years in Libyan prisons after a coup attempt against Moammar Gadhafi and now is working with the post-Gadhafi National Transitional Council; Razan Zaitouneh, a human rights lawyer who created the Syrian Human Rights Information Link, a blog reporting on atrocities including murders and human rights abuses by the Syrian army and police; and Ali Farzat, a political cartoonist known for targeting Syrian President Bashar Assad.

The Sakharov Prize, awarded annually since 1988, is named for the Soviet physicist and political dissident Andrei Sakharov. Recipients receive about $35,000.

World News // 2 hours ago
Russian exit: McDonald's says franchisee will buy its locations
May 19 (UPI) -- Just days after announcing that it was getting out of Russia, fast-food giant McDonald's said on Thursday that it's found a buyer for hundreds of locations in the Eastern European country.

World News // 19 hours ago
U.S. Embassy in Kyiv reopens with flag-raising
May 18 (UPI) -- Secretary of State Antony Blinken announced Wednesday that the U.S. Embassy in Ukraine's capital, Kyiv, has reopened for the first time since Russia invaded Ukraine three months ago. 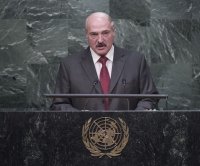