WADI KHALED, Lebanon, Aug. 18 (UPI) -- Syrian refugees fleeing the violence of the 5-month-old uprising against the regime of President Bashar Assad say they have lost hope of returning home soon.

Human rights organizations estimate 1,700 people have died in the fighting and nearly 3,000 are missing. About 5,000 more have fled to a border area with Lebanon where they are finding it difficult to find food and medical assistance, Voice of America reported Thursday.

Abdullah Tassi, who works with the Bekaa Youth for Development and Free Education, said the refugees thought they only would be in the area for a short time.

"But after days go on and on, now they believe they are going to stay here for a long time," Tassi said. "Some of them are trying to mingle with the [local] people and many of them are going to villages far from here."

A man identifying himself as Hassan al-Hassad said he went AWOL from the Syrian army a month ago and thousands of other soldiers have done the same thing, hoping to organize a new army to fight the regime.

U.S. President Barack Obama Thursday called on the 45-year-old Assad -- who came into power in 2000 following the death of his father, who led Syria for 29 years -- to step down and allow the Syrian people to achieve the reforms they are seeking.

"People woke up and realized that they have an alternative to living under a dictatorship of one man and his family and his cronies and having no say in their own future," Nadim Shehadi, an expert on Syria with London's Chatham House, told VOA. "And once people realize this it's irreversible."

World News // 9 hours ago
Canada approves Pfizer vaccine for 12- to 15-year-olds
May 5 (UPI) -- Health Canada on Wednesday authorized the Pfizer-BioNTech coronavirus vaccine for children ages 12 to 15. 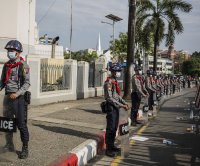 World News // 13 hours ago
North Korea getting ready for COVID-19 vaccines after reporting 'zero' cases
May 5 (UPI) -- North Korea is preparing to receive deliveries of COVID-19 vaccines from the World Health Organization's COVAX facility amid delays, according to the WHO.