DUBLIN, Ireland, June 6 (UPI) -- An Irish university has become the first outside North America to be listed in The Princeton Review's "best colleges," the guide announced Monday.

National University of Ireland Maynooth will be listed in "The Best 376 Colleges: 2012 Edition," which will be published in August.

"We chose National University of Ireland Maynooth as one of our best undergraduate colleges based on several criteria we consider when reviewing schools for this book," Princeton Review Vice President Robert Franek said. "First, we must have a high regard for their academic programs and other offerings. Second, our selections take into account institutional data we collect from the schools and the opinions of their students attending them whom we survey.

"We also greatly value the feedback we get about schools from our college-savvy staff across the United States, as well as from students, educators and parents who use our services and books."

Wayne Henry, Maynooth's director of international education, said "it is an honor" to be included.

The university says it is Ireland's fastest-growing college.

World News // 7 hours ago
British royal family to face $45M shortfall due to COVID-19
Sept. 25 (UPI) -- The royal family said it plans to cut expenses after projecting a $45 million shortfall to their finances in response to the coronavirus pandemic.

World News // 10 hours ago
'Rude' South Korea penguin invited to attend parliament
Sept. 25 (UPI) -- A South Korean penguin character with a reputation for making curt remarks and sneering at its boss has been requested to take part in a parliamentary audit.

World News // 13 hours ago
EU appeals $15B Apple-Ireland antitrust setback to highest court
Sept. 25 (UPI) -- The European Union said Friday it will appeal a court decision that dismissed a claim against Apple that said Ireland unlawfully granted billions in aid to the U.S. tech company.

World News // 13 hours ago
At least 2 stabbed in Paris near site of 2015 Charlie Hebdo attack
Sept. 25 (UPI) -- French police arrested a man Friday after they say he stabbed at least two people outside the former offices of satirical newspaper Charlie Hebdo, which was the scene of a deadly terrorist attack five years ago. 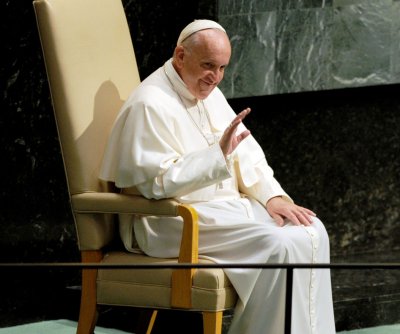