ISLAMABAD, Pakistan, May 14 (UPI) -- Pakistan has called for a review of its agreement to work with U.S. military forces in the aftermath of the raid that killed al Qaida leader Osama bin Laden.

A resolution passed unanimously in the Pakistani Parliament Saturday called for a review and threatened to end U.S. access to a landing station used to move troops into Afghanistan, CNN reported.

The resolution belies statements by leaders that the May 2 raid that killed bin Laden had not caused a rift between the two countries.

Pakistani and U.S. officials have both said there was no proof Pakistani officials knew where bin Laden was hiding.

But the resolution passed in Islamabad said it was concerned by: "The campaign to malign Pakistan, launched by certain quarters in other countries without appreciating Pakistan's determined efforts and immense sacrifices in combating terror."

The resolution called attention to the deaths of 35,000 Pakistani civilians and military personnel "killed in (Pakistan's) fight against terror."

World News // 9 hours ago
African Union suspends Sudan; World Bank pauses funds over coup
Oct. 27 (UPI) -- Resistance and condemnation of the military coup of Sudan grew at home and abroad on Wednesday as the African Union suspended the country's membership and protests continued within its borders. 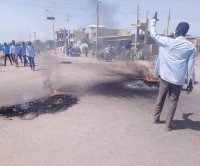