ISLAMABAD, Pakistan, May 3 (UPI) -- Al-Qaida leader Osama bin Laden, killed by the U.S. forces in Pakistan, was an "outsider" in the country," Pakistan's information minister said.

Speaking to reporters on the killing of bin Laden Sunday night by a U.S. Navy SEALS team in Abbottabad, northeast of Islamabad, Firdous Ashiq Awan said the United States had acted on the basis of a U.N. Security Council resolution, the state-run Associated Press of Pakistan reported.

"Had Osama Bin Laden been in any other country, he would have faced the same fate and we can say that unfortunately he was in Pakistan when he was killed," the minister said. "Osama bin Laden was a non-state actor in Pakistan and was an outsider."

The Pakistani foreign ministry has said the operation against bin Laden was conducted in accordance with U.S. declared policy that its forces would take a direct action against the most wanted terrorist wherever he was found in the world.

The minister said bin Laden was involved in attacks on Pakistan, so the U.S. operation against him was not a breach of Pakistan's sovereignty, APP reported. 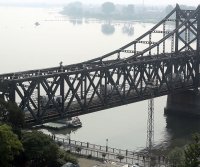 World News // 17 hours ago
U.S. witness to 1980 South Korea massacre recalls brush with death
NEW YORK, Dec. 4 (UPI) -- The 1980 slaughter of South Korean civilians in Gwangju had an unlikely eyewitness in a former U.S. Peace Corps volunteer who smuggled himself into the city during the military crackdown.