An estimated 500 members of the church were prevented from leaving their homes Sunday and another 36 were detained, including the chief pastor, who was said to be under house arrest.

CNN said it tried to send a crew to cover the services, but they were turned away and had their press credentials confiscated by police.

Shouwang Church is one of largest independent "house" churches in China and has repeatedly sparred with government authorities. CNN said police officers told them they were on the scene for "security reasons."

Chief Pastor Jin Tianming told CNN his flock would not be discouraged by the setback. "We will not change our decision to worship as this is a matter of faith," he said.

World News // 10 hours ago
Russia sends warships after Turkish troops killed in Syria
Feb. 28 (UPI) -- Russia sent two warships to the Middle East on Friday after dozens of Turkish soldiers were killed in an attack in Syria's heavily disputed northwest, amid fear of an escalating conflict.

World News // 12 hours ago
Pope Francis takes sick at Vatican for second straight day
Feb. 28 (UPI) -- Pope Francis postponed some of his scheduled activities for a second consecutive day Friday due to what the Vatican called "a slight indisposition."

World News // 15 hours ago
More countries infected with COVID-19 as WHO warns it has 'pandemic potential'
Feb. 28 (UPI) -- Several countries confirmed their first infections of the deadly coronavirus as the World Health Organization warned countries without a confirmed case of COVID-19 to prepare for its arrival or pay the consequences. 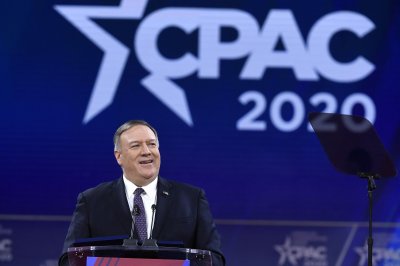