The Japan Meteorological Agency said the rattled the northeast region at 7:24 a.m. and prompted officials to issue a tsunami warning, Kyodo News reported.

There were no initial reports of damage.

The Fukushima nuclear power plant's operator Sunday retracted an alarming report that water at the site was 10 million times above normal radioactivity.

Tokyo Electric Power said the initial reading at the No. 2 reactor was inaccurate, although it did not know by how much, The Guardian reported.

"The number is not credible. We are very sorry," spokesman Takashi Kurita said.

The initial reading led to another evacuation at the site, stopping urgent work to pump and store radioactive water building up in the turbine buildings of three of the six reactors crippled by the 9-magnitude March 11 earthquake and tsunami.

Japanese government spokesman Hidehiko Nishiyama said radiation in seawater 350 yards outside the plant had risen to 1,850 times the usual level Sunday, up from 1,250 Saturday, The New York Times reported.

He said radioactive materials may still be leaking into the sea, Kyodo News reported, though it was not clear from what route.

One pump was extracting radioactive water, and two more were on the way. The U.S. military was sending barges loaded with 500,000 gallons of fresh water, which is less corrosive then the sea water now being used, The Guardian said.

Two of Fukushima's six reactors are considered safe after a "cool shutdown," but four are not yet under control.

The International Atomic Energy Agency reported Sunday two of the three workers hospitalized Thursday after stepping in radioactive water had "significant" burns on their legs, the Times said.

"While the patients did not require medical treatment, doctors decided to keep them in hospital and monitor their progress over coming days," the IAEA quoted Japanese officials as saying.

In Tokyo, local officials said radiation in the city's water supply was diminishing to the point where none was found in two of three test locations Sunday.

Nationwide, the confirmed death toll from the earthquake and tsunami was 10,668, the National Police Agency said. There were still 16,574 people unaccounted for, the agency said. 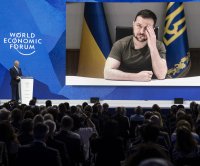