The Jerusalem Post said the weapons were from Iran.

Commandos from Israel's Navy Flotilla 13 boarded the "Victoria," which flew a Liberian flag, in the Mediterranean Sea about 230 miles off Israel's coast Monday night.

An Israeli army spokesman said the commandos met no resistance when boarding the vessel.

The ship, which was towed to the port of Ashdod for inspection, reportedly had left Syria and docked at the Turkish port of Mersin before heading for Egypt, Ynetnews.com said. The Web site said the ship had been under surveillance for some time prior to the takeover.

Israel's Foreign Ministry informed German officials of the seizure after it was revealed that the ship belongs to a German company, officials told the Web site.

The Jerusalem Post reported that crew members who were initially questioned by Israeli security officials said they were unaware of the nature of the cargo they were carrying.

The ship was to have docked in the Egyptian port of al-Arish and the weapons were to have been loaded in trucks and transported to Gaza, the army said. 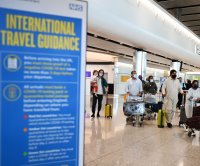 World News // 2 hours ago
North Korea urges citizens to become 'water pumps' amid drought
July 26 (UPI) -- North Korean farmers could be reeling from the impact of record-high temperatures as extreme weather takes a toll on crops.

World News // 4 hours ago
Global Hawk drone flies near North Korea ahead of Korean War anniversary
July 26 (UPI) -- An unmanned U.S. reconnaissance aircraft flew over the Korean Peninsula ahead of North Korea's observance of "Victory Day," which marks the anniversary of the 1953 Korean Armistice Agreement.

World News // 6 hours ago
U.N. report: Civilian casualties in Afghanistan at record level this year
July 26 (UPI) -- More women and children have been killed or injured in Afghanistan over the first six months of 2021 than in the first half of any year since 2009, when record-keeping began, the U.N. mission in Afghanistan said Monday.
Advertisement