Confusion in Japan as people search

The movements are large on the seismograph in the Earthquake Center at Saint Louis University after a massive earthquake hit Japan March 11, 2011. UPI/Bill Greenblatt | License Photo

MINAMISANRIKU, Japan, March 14 (UPI) -- Confusion but not panic has ensued from Japan's earthquake and tsunami, with hundreds dispossessed or looking for missing family or friends, police say.

Numbers are uncertain, but as of 8 p.m. local time Monday, the official death toll from the earthquake that struck Friday and the tsunami it triggered was 1,897, excluding the latest reports of found bodies, authorities said.

The nuclear power plant in Fukushima Prefecture was rocked Monday by a second hydrogen explosion, causing Tokyo Electric Power Co. to restrict power, which in turn resulted in disruption of train services in the Kanto region around Tokyo. This added to the difficulty of loved ones looking for family members or friends.

A third explosion Tuesday damaged part of the container that holds water used to cool it down, Britain's The Telegraph reported.

More than 2,000 bodies have washed ashore along Japan's Pacific coast but rescuers haven't been able to reach the isolated towns and villages located in some of the worst-affected areas, the newspaper said.

Rescuers reported finding 1,000 bodies on two shores in Miyagi prefecture and another 1,000 in the town of Minamisanriku, where 10,000 people -- more than half the local population -- had not been accounted for. The fate of tens of thousands of people, including about 8,000 residents of Otsuchi, remains unknown.

The United States dispatched two technical experts to help Japan address the crisis at its quake-damaged nuclear plants. The Obama administration is assembling another team of experts to be deployed to the region, Gregory Jaczko, chairman of the U.S. Nuclear Regulatory Commission, said.

"It is a serious situation in Japan," Jaczko said, adding U.S. personnel were helping Japanese officials look for ways to keep the reactors cooled.

Japan's recovery from an epic earthquake, tsunami and subsequent explosions at nuclear reactors in the quake zone sustained another setback when fuel rods at a Japanese reactor were fully exposed after cooling broke down, the plant operator said Monday. The rods at Fukushima's No. 2 reactor were exposed when a pump pouring in seawater to cool it ran out of fuel, Tokyo Electric Power told Kyodo News.

Advertisement
RELATED Japan to be at G8 meeting despite crisis

The Japan Meteorological Agency Sunday upgraded the intensity of Friday's temblor to a magnitude of 9.0. The U.S. Geological Survey had pegged it at 8.9.

The effects of radiation fallout from the plants on the United States or its territories were minimal, Jaczko said.

"Based on the type of reactor design, we see a very low likelihood that there's any possibility of harmful radiation levels in the United States, Hawaii or U.S. territories," he said. "We believe the steps the Japanese taking to respond to the crisis are consistent to approach we would take in the United States."

During a speaking engagement in Arlington, Va., President Barack Obama reiterated America's support for the people of Japan, saying he told Japanese Prime Minister Naoto Kan "the United States will continue to offer any assistance we can as Japan recovers from multiple disasters, and we will stand with the people of Japan in the difficult days ahead."

The plant has been shut down since Friday when northeastern Japan was hit by the twin-curses of the earthquake and a tsunami that carried speeding walls of Pacific Ocean seawater as much as 30 feet high.

Saturday's explosion at the No. 1 reactor led to the evacuation of residents within a 12.5-mile radius of the plant.

The U.S. 7th Fleet temporarily repositioned its ships and aircraft away from Japan's Fukushima Dai-Ichi Nuclear Power Plant after detecting low-level contamination in the air and on its aircraft operating in the area, the Pentagon said. The source of this airborne radioactivity is a radioactive plume released from the power plant, the Pentagon said in a release.

Sensitive instruments detected low levels of radioactivity on 17 air crew members returning to the USS Ronald Reagan after conducting disaster relief missions near Sendai, the Defense Department said. The radioactivity was removed from the affected personnel by washing with soap and water, officials said. No other contamination was detected.

"We remain committed to our mission of providing assistance to the people of Japan," the 7th Fleet statement said.

World News // 21 minutes ago
Blinken pledges U.S. support in Ukraine, vows 'consequences' for Russian aggression
Jan. 19 (UPI) -- During his visit to Ukraine on Wednesday, U.S. Secretary of State Antony Blinken assured the Eastern European country that it has U.S. support and urged Western nations to unite against Russian aggression.

World News // 10 hours ago
Auction for Roman villa containing Caravaggio mural draws no bidders
Jan. 18 (UPI) -- An auction for a Roman villa featuring a ceiling mural by Italian painter Caravaggio that is at the center of an inheritance dispute was rescheduled after failing to receive any bidders. 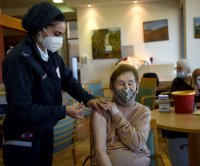 World News // 19 hours ago
Israeli study suggests 4th COVID-19 shot not enough against Omicron
Jan. 18 (UPI) -- A fourth dose of the Pfizer/BioNTech coronavirus vaccine may not be enough to protect people from getting infected with the Omicron variant of COVID-19, a new Israeli study released Tuesday suggests.
Advertisement