The intensity of the quake, courtesy of the U.S. Geological Survey.

The death toll from Tuesday afternoon's 6.3-magnitude offshore killer quake, the second worst in New Zealand's history, had risen to 75, while the fate of some 300 people, many trapped under collapsed buildings and structures remained unknown even as the country's South Island city continued to be battered by aftershocks.

The major concern Wednesday was the 26-story Hotel Grand Chancellor in the central part of the city, which was on the verge of collapse, the New Zealand Herald reported. Rescue operations in the vicinity of the hotel were suspended as the facility, where one floor had already collapsed, was reported to have moved about 3 feet horizontally toward the east.

Christchurch Mayor Bob Parker warned there would be significant safety risk if the hotel on Cashel Street collapsed amidst continuing aftershocks.

The Herald reported the latest aftershock, with a magnitude 4.2, struck about 2 p.m., about 6 miles southeast of Christchurch at a depth of about 3 miles.

City Superintendent Dave Cliff said 55 of those killed in the quake were now in a temporary morgue while 20 others were being taken there, Herald said. Parker earlier announced 300 were listed as missing.

A shaken New Zealand Prime Minister John Key, who declared a national state of emergency, said the entire country was grieving but expressed confidence the city, which was in the process of being rebuilt from a disastrous 7.1 quake last September, would recover again.

"Significant numbers of people" were trapped inside two collapsed buildings downtown, a police statement said, adding officers also were "aware of there being a number of deceased people in both buildings."

The devastation was so extensive rescue and medical teams worked under most difficult conditions as the quake had knocked down electric power and telephone lines, torn up roads and streets and burst water and sewage lines.

TVNZ reported the Christchurch Hospital had already treated more than 200 patients with major traumas and staff members from various hospitals were in the quake-hit areas performing amputations to free those trapped in the rubble.

The report quoted Prime Minister Key as saying the impact from Tuesday's disaster could be worse.

One estimate said the Christchurch earthquake may become the costliest for the global insurance industry since Hurricane Ike that hit the United States in 2008.

The Herald reported Christchurch's Rolleston prison was being prepared to set up more beds to accommodate rescuers arriving in the city including about 200 from Australia and another team from Singapore.

Separately, military personnel ferried tourists and those from out of town to Wellington and Auckland to keep hotel rooms available for rescuers and relief workers.

U.S. President Barack Obama in his condolence statement offered said: "The United States is a close friend and partner of New Zealand."

He said a U.S. Agency for International Development Disaster Assistance Response Team would be deployed to help Christchurch and "we stand ready to provide more assistance as needed." 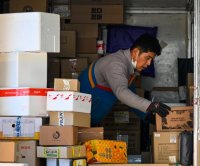