An Ultra-Orthodox Jew covers his face with his hat in Rachel's Tomb in the Biblical city of Bethlehem, September 15, 2004. (UPI Photo/Debbie Hill) | License Photo

JERUSALEM, Dec. 21 (UPI) -- An Israeli ministerial committee is expected to approve funding the renovation of heritage sites, some in the West Bank and Golan Heights.

Approximately $25.23 million has been allocated for the renovation of 16 archaeological and heritage sites, The Jerusalem Post said.

Among the sites to be renovated are the Herodian National Park in the Gush Etzion region of the West Bank and the Kanatir or Rechavam's Arches in the Golan Heights where the ruins of a sixth century synagogue are, the daily said.

The committee is due to approve the funding in the framework of the National Heritage Plan Tuesday.

"We need to strengthen our connection to the nation and to the state. It is what defines who we are," the Post quoted Prime Minister Binyamin Netanyahu as saying Monday, explaining the importance of the plan, which he said will allow parents to connect their children with the nation's Jewish and Zionist heritage.

World News // 11 minutes ago
Once comfortable, life in Lebanon now a struggle for basics
BEIRUT, Lebanon, April 14 (UPI) -- The people of Lebanon have endured many crises over the past 45 years -- but nothing like the situation they face now. Gone are the times when they could afford nice clothes, branded products, new cars and housekeepers. 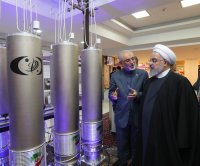 World News // 16 hours ago
Sanctions on North Korea effective despite illicit activity, analyst says
April 13 (UPI) -- North Korea's methods of evading sanctions have not been enough to offset their impact, according to a new study.