World News // 8 hours ago
Kolmar Korea acquires global ownership of cosmetics brand
SEOUL, May 17 (UPI) -- Kolmar Korea, a cosmetics contract manufacturer based in Seoul, announced Tuesday it has acquired the global trademark rights to the Kolmar brand from the Kolmar headquarters office in the United States. 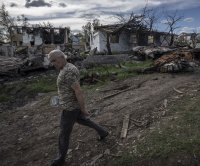 World News // 16 hours ago
Russian shelling destroys residential building in Bakhmut, Ukraine says
May 17 (UPI) -- Russian forces struck a building in the town of Bakhmut in Donetsk on Tuesday, killing at least one person and injuring a child, Ukrainian military sources said.

World News // 22 hours ago
France says it will defend Sweden, Finland against attacks as they seek NATO membership
May 16 (UPI) -- France will defend Sweden and Finland, Elysee said Monday, as the two Nordic countries have received threats from Russia over their decisions to join the NATO defensive military alliance.
Advertisement