SEOUL, Nov. 11 (UPI) -- Leaders of surplus-positive nations at a Group of 20 Nations summit in Seoul Thursday resisted calls for policies that would re-balance international trade.

U.S. President Barack Obama met privately with Chinese President Hu Jintao and German Chancellor Angela Merkel to press for polices that would either measure trade imbalances or tie them to currency rate exchanges, The New York Times reported. China, however, sought wording in the agreement that would not tie it to currency manipulation, while Germany rejected calls for policies that would undermine its export-oriented economy.

Both countries have been critical of the Federal Reserve's decision last week to pump $600 billion into the economy through Treasury bond purchases, a move that weakens the dollar, putting imports at a disadvantage.

The international summit also included a meeting of leaders of the world's 120 top companies, which urged a balanced effort to promote freer trade and investment.

The call for a vigorous-but-careful approach to free trade and investment was among the 68 recommendations corporate leaders offered the G20 leaders before the official opening of the summit, South Korea's news agency Yonhap reported Thursday.

"Today in Seoul, we engaged in a rich exchange of views both among ourselves and with G20 leaders and policy-makers," Peter Brabeck-Letmathe, Nestle chief executive officer, said during a news conference.

In a joint statement, business CEOs also urged G20 leaders to "roll back protectionism at least to where it was at the start of the global financial crisis" and permanently include trade and investment on the G20 agenda.

"It is true the public sector has led the economic recovery through increased spending and other means, but there are limits to what governments can do," said Lee, one of 10 heads of state attending the business CEO meeting. "And that is why I believe eventually the business sector has to help create new engines of growth if we are to completely overcome the global crisis and achieve sustainable growth."

"All of the work we do is nothing unless it encourages businesses to grow and employ people. We want global growth, but you are the people who will deliver. Help us achieve those goals," Cameron said.

Business leaders called for self-imposing measures to reform the financial market, saying in a joint statement, "New standards for banking regulation and supervision must be sufficiently strong and responsive, while still encouraging growth and financial innovation." 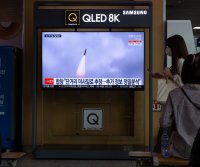