Fighting over water kills 29 in Pakistan

In the past week, at least 29 people have died and 40 have been injured in the fighting, the Press Trust of India reported.

The Pakistani newspaper Dawn said the dispute is between the Shalozan and Shalozan Tangi tribes.

The Kurram area is in northwest Pakistan on the border with Afghanistan and historically the region was a major route to Kabul, luring ethnically mixed settlers to the region. The Kurram River flows through the valley of the same name toward the Indus.

World News // 18 hours ago
Danish leaders consider digging up dead minks, burning them
Nov. 27 (UPI) -- Government officials in Denmark are considering digging up hundreds of thousands of minks that were killed and buried hastily because of the coronavirus.

World News // 1 day ago
Germany urges Europe to close ski resorts ahead of holiday season
Nov. 26 (UPI) -- German Chancellor Angela Merkel said she is seeking a ban on ski resorts throughout Europe ahead of the holiday season to stem the surging spread of the coronavirus, but not all countries are on board. 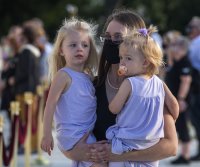 World News // 1 day ago
U.N. study shows women working harder, getting poorer during pandemic
Nov. 26 (UPI) -- Women are doing more unpaid work during the COVID-19 pandemic and have a greater danger of slipping into poverty, a report released Thursday from the United Nations shows.