TORONTO, May 30 (UPI) -- Opponents and supporters of Israeli Prime Minister Binyamin Netanyahu staged events ahead of a Toronto speech where he pledged not to repeat "mistakes."

Orthodox Jews rejecting the establishment of the state of Israel until the Messiah comes gathered at the Princes' Gates at Exhibition Place, while the United Jewish Appeal Federation of Greater Toronto organized its annual Walk With Israel downtown in support of the prime minister, the Canadian Broadcasting Corp. reported Sunday.

Talking about the prospect of peace, JTA reported Netanyahu said the people of Israel "are prepared to make compromises for peace but they're not -- and I'm not -- prepared to make any compromises on our security. Israel will never ever give up the power to defend itself."

This was the first time since 1978 a sitting Israeli prime minister addressed the Jewish community of Toronto and it is seen as a thank-you to Canadian Prime Minister Stephen Harper's staunchly pro-Israel stance, JTA reported.

World News // 8 hours ago
Japan suspends all incoming flights in December over COVID-19 concerns
Dec. 1 (UPI) -- Japan's government took steps on Wednesday to suspend all air travel into the country for the month of December over growing concerns about the newest COVID-19 variant. 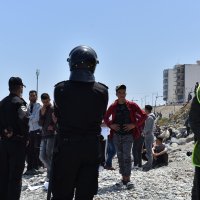