WASHINGTON, May 14 (UPI) -- The AFL-CIO and a civil rights coalition urged federal officials to stop training Arizona's law enforcement officials because of the state's immigration law.

Unless the Homeland Security Department ends its agreements to train Arizona state and local law enforcement personnel, "the federal government will be complicit in the racial profiling that lies at the heart of the Arizona law," AFL-CIO President Rich Trumka and Leadership Conference on Civil and Human Rights President Wade Henderson said in a letter to Homeland Security Secretary Janet Napolitano. 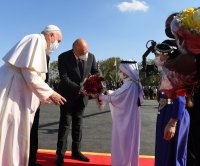