"We really just stood with them and as the tide came in and started floating, we were just able to push them out and away they went," local Ted Haowden says.

Sunday's beaching followed an event Saturday night when pilot whales came into the bay and the locals guided them back out, Haowden said.

"We thought everything was OK, we checked them in the boat and then we woke up this morning and saw a whole lot on the beach here," he said.

Local residents expect to bury the whales on the beach Monday afternoon.

World News // 8 hours ago
120-year record in jeopardy as Moscow sizzles under historic heat wave
A blistering heat wave that has been enveloping eastern Europe nudged its way into western Russia this week, challenging Moscow records that have stood for more than a century.

World News // 14 hours ago
Airstrike kills dozens in Tigray region of Ethiopia
June 23 (UPI) -- An airstrike on a crowded market in northern Ethiopia on Tuesday killed at least 80 people and injured 43 others, the United Nations and witnesses said. 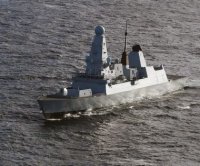 World News // 18 hours ago
Organizers bar consumption, sale of alcohol at Tokyo Summer Olympics
June 23 (UPI) -- With one month to go before the start of the postponed 2020 Summer Olympics in Tokyo, organizers are planning to unveil rules against several things to mitigate COVID-19 infections at the Games -- including no alcohol.

World News // 23 hours ago
Lebanon may need a savior, but it likely won't be Syria this time
BEIRUT, Lebanon, June 23 (UPI) -- Lebanon, which has for decades relied on outside powers to help solve its problems, is again waiting for "a savior" to pull it from its worst political and financial crisis since the 1975-90 civil war.

World News // 1 day ago
Wassily Kandinsky painting thought lost for 70 years sells for $1.4M
June 22 (UPI) -- A watercolor painting by Russian artist Wassily Kandinsky believed to be lost for more than seven decades has sold at auction for $1.4 million.