TEHRAN, Nov. 24 (UPI) -- The Iranian government has been engaging in what the country's supreme leader, Ayatollah Ali Khamenei, has called a soft war against dissidents.

To stifle the opposition movement, the government has begun a series of initiatives, such as inserting 6,000 militia centers in elementary schools across the country to promote the values of the Islamic Revolution and creating a special police unit to troll the Internet in search of anti-government postings, The New York Times reported Tuesday. Also, a company tied to the Revolutionary Guards acquired a majority share in the nation's telecommunications monopoly, essentially giving the Guards control of Iran's land lines, Internet providers and cellphone companies.

Brig. Gen. Muhammad Bagher-Zolghadr, a former deputy chief of the Revolutionary Guards, first voiced the phrase "soft war" during a speech in September, saying "nothing is solid" in a soft war because the enemy "is everywhere." Zolghadr said a soft war was fought largely through the media, and the West was "better equipped" to fight it than Iran.

"By trying to gain more control of the media, to re-Islamize schools, they think they can make a comeback," said Mehrzad Boroujerdi, an Iran expert and professor at Syracuse University. "But the enemy here is Iran's demographics. The Iranian population is overwhelmingly literate and young, and previous efforts to reinstall orthodoxy have only exacerbated cleavages between citizens and the state." 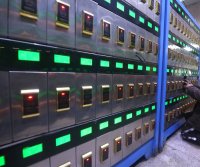