JERUSALEM, Oct. 28 (UPI) -- A self-styled Jewish rabbi accused of ordering his followers to abuse children, landed in Israel Wednesday after being extradited from Brazil.

Elior Chen, 29, apprehended by Brazilian police in Sao Paulo in June, was accused of abusing 3- and 4-year-old brothers, who were rushed to a hospital in March 2008 in serious condition. Prosecutors say Chen advised the boys' parents to beat them severely to "correct their corrupt souls."

Chen was taken from the airport to a Jerusalem police station, Ynetnews.com reported.

At the police station, Chen's attorney, Ariel Atari, said he was waiting to see what charges were filed against his client.

"In any case, these things never happened," Chen said. "(Chen) will look at them during the probe, listen to them, and that's it. He will say whatever he has to say at court."

Officials say the parents used hammers, knives and other instruments to attack the children.

Chen fled Israel to Canada and from there to Brazil in 2008 when allegations against him became known. Police in Sao Paulo detained him after an international arrest warrant was issued.

World News // 7 hours ago
Israeli airstrike targets tower offices of media outlets
May 15 (UPI) -- Israeli forces launched hundreds of strikes on Gaza on Saturday, including one that destroyed a building containing the offices of multiple news outlets. 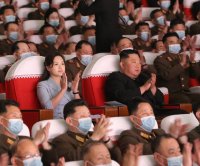