Dec. 29 (UPI) -- As Americans end one year and begin another, one of the most controversial topics of conversation will be the presidential election.

We experienced the election season from a unique perspective. We each taught college courses on the 2020 campaigns while they were underway, and as a result had a sort of three-month-long focus-grouplike conversation with the newest American voters.

One of us teaches at a small liberal arts college, the other at a flagship state university, both in Virginia. Our combined 275 undergraduate students came from rural and urban areas, North and South, and from cities and states all across the country. Nearly all were voting in their first presidential election. Like many American colleges, ours have slight majorities of women over men, and a higher proportion of whites in the student body than in the U.S. population as a whole.

Our students were anxious and enthusiastic about the subject matter and shared some of their fears and insights with us and with one another. We tried to explain how national politics works, and we learned from their fresh perspectives on the presidency and presidential elections. After an election year marked by struggle and challenge, what we observed gave us some hope.

Our students, while young, recognized that 2020 was a consequential contest without obvious parallels in recent American elections. One of the candidates was a mesmerizing and polarizing populist who rose to political fame just four years ago; the other was a familiar actor on the national stage for nearly five decades -- three decades longer than our students have been alive.

A common theme was division. Some of our students wrote about previous elections and saw comparisons between 2020 and 1800, when partisanship ran hot and slanderous commentary was common. Some thought today was more like 1968, with civil rights activism, angry political protests, a silent majority and racist dog whistles that everyone could hear.

RELATED Holiday cards use humor to cope with difficult times

A few thought 2020 was like 1852, when both parties struggled to avoid the hard issues facing the nation; or 1920, when a war-weary and pandemic-exhausted nation craved normalcy.

If those last two comparisons held, they would make Joe Biden the next Franklin Pierce or the next Warren Harding -- presidents who were not exactly awe-inspiring.

And like most Americans, the students were worried about what they saw happening in the country. An informal survey in one of our classes showed that of the more than 200 students who responded, over 50% were stressed out and exhausted by the election. A few -- 15% -- even said they were "scared" by what they were seeing in national politics.

But our students weren't turned off by the election.

All of the surveyed students were first-time voters and nearly all of them actually voted. Almost all -- 95% -- thought the vote-counting process was conducted fairly. Twenty-five percent got beyond the stress and exhaustion and reported that they felt interested and energized by the election. Only 3% were bored by it.

Even better: More than 85% of students said they would get involved in politics in the years ahead. Of those, one in four said they'd consider running for office themselves; six in 10 want to work in a public policy job on issues they care about.

Those numbers are perhaps inflated by the lofty ambitions of the young people who attend highly selective institutions of higher education. But even if our results are from an admittedly small and non-random sample, they are still encouraging -- especially compared with polling in previous years. Our students will not be content to stay at home and leave politics to others. These are the kind who are ready to change the world.

In one of our courses, students took time at the beginning of class periods to report on where the candidates stood on the major issues of the day. This was information that was hard to find in the chaotic candidate debates or in superficial social media messaging. For both of us, taking issues seriously in a predominantly character-focused campaign was a relief from negative advertising and Twitter tirades, and it made our students more confident observers of what was really at stake in 2020.

We were surprised to find that learning about this election made our students less partisan. In the informal class survey, a majority said the course had reduced, not enhanced, their partisanship.

In one of our courses, we presented opposing viewpoints from Republican and Democratic guest speakers, taking the students out of the bubble of their one-sided news feeds. Students in that class said that a highlight of the course was asking questions that applied to speakers from both sides, and then comparing the answers.

Americans are divided by more than just political party affiliation. In one of our classes, students read Ezra Klein's "Why We're Polarized," which presents evidence that American partisanship is increasingly intertwined with geography, demography, religious conviction and level of education.

Good universities accept applicants from different backgrounds and create opportunities for discussions that involve students with different political views. Our students told us that taking an election course made them better equipped for the hard conversations about politics and policy that often take place between friends and family members.

Don't get us wrong -- partisanship is alive and well on college campuses, where liberal points of view are often overrepresented. But our students showed less partisan division than we had expected and seemed open to argument and evidence from more than one side of the political spectrum. In fact, the surveyed students said by a 70-30 margin that they regularly talk about politics with friends who have a different political view from their own -- something Klein argues is not typically the case with most Americans these days.

Was their somewhat subdued partisanship because their exposure to 2020 controversies took place in the constraints of a college classroom? Or do they belong to a generation that is going to reject the hyperpartisanship of their elders and try harder to find common ground and common sense in American politics?

We don't know the answer, but we just completed a semester in which our nation's newest voters gave us some hope for the future of American civil society.

Mary Kate Cary is an adjunct professor in the department of politics and a senior fellow at UVA's Miller Center, University of Virginia and Robert A. Strong is a professor of politics at Washington and Lee University. This article is republished from The Conversation under a Creative Commons license. Read the original article.

Voices // 10 hours ago
Iranian mullahs face European justice
Jan. 19 (UPI) -- On Feb. 4, a court in Antwerp, Belgium, will announce its verdict in the trial of Assadollah Assadi, a senior diplomat from the Iranian Embassy in Vienna, and three co-conspirators on charges of terrorism.

Voices // 4 days ago
Capitol siege raises questions over White supremacists in police ranks
Jan. 15 (UPI) -- The apparent participation of off-duty officers in the rally that morphed into a siege on the U.S. Capitol on Jan. 6 has revived fears about White supremacists within police departments.

Voices // 5 days ago
Angry men: Capitol riots marked by hatred toward women
Jan. 14 (UPI) -- Among the various forms of violence on display during the U.S. Capitol insurrection, one has been largely overlooked: misogyny, or hatred toward women. 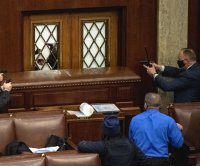