Customers wait as workers hang a sign at a Starbucks Coffee franchise in the East Village neighborhood of Manhattan in New York City on Thursday, May 28, 2020. The COVID-19 pandemic has challenged the U.S. economy. Photo by John Angelillo/UPI | License Photo

Aug. 14 (UPI) -- The COVID-19 pandemic has radically affected the American economy, reducing spending by American households on materials goods, air travel, leisure activities as well as the use of automobiles. As a result, greenhouse gas emissions have temporarily fallen dramatically.

While this may be a positive for the environment, the social price is high: Since the U.S. economy depends heavily on consumer spending, the country is experiencing the highest unemployment rate since the Great Depression, the threat of homelessness for tens of thousands of people and a failure of businesses large and small. How did the U.S. arrive at the point whereby mass consumption -- and the greenhouse gas emissions associated with it -- is necessary for economic and social well-being? Are greenhouse gas reductions and a thriving economy incompatible?

A consumer society is a 20th-century construct. The American Dream has become synonymous with buying material goods such as cars, houses, furniture or electronics, distorting its original meaning. Today, the spending habits of American households make up 70% of the U.S. gross domestic product, a measurement that describes the size of the economy. U.S. companies spend about $230 billion on advertising each year, half of all the money spent on advertising globally.

Today's consumer society emerged after the end of World War I, fueled by the emergence of the modern advertising industry and facilitated by widespread adoption of consumer credit. Edward Bernays, the nephew of Sigmund Freud, is generally credited with inventing the field of marketing during the 1920s. The essence of his approach was to tap into people's desires to feel good, powerful and sexy instead of emphasizing the usefulness of a product. Bernays created the term "engineering of consent" and popularized the term "consumer" when referring to American people.

Mass consumption grew steadily until the onset of the Great Depression. But the deliberate creation of the present consumer society took off in earnest during the 1940s and 1950s. When WWII ended, so did wartime industrial production. Industry leaders shifted their enormous production capabilities from the military to the civilian sector.

At the same time, President Harry Truman was concerned with looming unemployment among returning veterans and saw mass production of consumer goods as the solution. The 1944 GI Bill helped returning veterans purchase houses with down payments and government-guaranteed loans. Mortgage interest deductions and government-financed infrastructure -- local utilities and roads, a national highway system -- made suburban homeownership a logical financial plan for families, while Social Security provided relief from having to save for old age.

RELATED Remembering Brent Scowcroft, guns and other events of August

Labor unions, too, were vested in increasing wages for their members, so working families could afford houses, cars and household appliances. At this particular historical juncture, business, government and labor came together, united in their shared goal to increase household consumption as the bedrock of economic prosperity and social harmony.

These developments took place in the context of the post-war euphoria over the uncontested power of the U.S., the post-Depression hunger for a better life, advances in cheap mass production and a demographic boom. Consumerism became a symbol of the superiority of the capitalist system over Soviet-style communism, as illustrated by the famous "Kitchen Debate" in 1959 at the American National Exhibition in Moscow. Standing among the sleek labor-saving appliances of a modern American kitchen, Vice President Richard Nixon demonstrated to Soviet Premier Nikita Khrushchev the higher quality of life of working people in the U.S.

The results of this business-government-labor alliance were astonishing. National output of goods and services doubled between 1946 and 1956, and doubled again by 1970. Mass-produced cheap and comfortable single-family homes, increasingly distant from city centers, became affordable. The iconic 1949 Levittown on Long Island, New York, was a model of the suburbs: uniform, convenient, segregated by race and dependent on the automobile. By 1960, 62% of Americans owned their homes, in contrast to 44% in 1940. Suburban shopping malls, uniform and racially segregated, became by default public gathering spaces, replacing city streets, cafes and places of commerce.

This social transformation occurred in a span of a single generation. Consumerism and a suburban lifestyle became the organizing principles of society and synonymous with fundamental values such as family well-being, safety, democratic political freedom and the American Dream.

Since the 1950s, this version of a good life - shaped by advertising of what was necessary to live well - has been remarkably stable. But there is a twist: The notion of what represents basic comfort has been steadily moving toward larger and more - SUVs and myriad conveniences and technologies, bigger and more dispersed houses filled with furniture and stuff and additional bathrooms and bedrooms, larger kitchens, media and exercise rooms and outdoor living rooms.

Today, the best predictor of household carbon footprint is income. This correlation holds true in different countries, regardless of political views, education or environmental attitudes.

Consumption comes at a high ecological cost. As the gross national product grows - driven largely by household consumption - so do greenhouse gas emissions. Many scientists and policy analysts believe that as technology increases energy efficiency and replaces fossil fuels with renewable energy sources, greenhouse gas emissions will be significantly reduced. But despite the rapid advances in these technologies, there is no evidence that trends in greenhouse gas emissions are separate and independent from economic growth trends. Neither is there a basis for the idea that green growth will prevent the anticipated climate catastrophe that the world is facing.

At the same time, there is little evidence that Americans have become happier in the last seven decades of growing consumerism.

This pandemic reveals to me the vulnerability of an economy heavily dependent on a single source of economic activity -- consumption. From my perspective, the U.S. would be better off if the economy -- our collective wealth -- were more heavily weighted toward public spending on, and investment in, education, health care, public transit, housing, parks and better infrastructure, and renewable energy. Such an economy would contribute to human well-being, emit less greenhouse gas and be less vulnerable to sudden disruptions in consumer spending.

As I see it, it is time for an honest public conversation about the carbon footprint of our "basic" lifestyles and what Americans need rather than what they are told they need.

Halina Szejnwald Brown, is professor emerita at Clark University. This article is republished from The Conversation under a Creative Commons license. Read the original article.

Voices // 1 day ago
TikTok is upending workplace social media policies
Dec. 4 (UPI) -- In 30-second bites on TikTok, workers conjure up a mini fantasy world of a job free of supervisors -- thumbing their noses at authority, in uniform.

Voices // 2 days ago
Troop drawdown in Afghanistan signals American weakness
Dec. 3 (UPI) -- President Donald Trump's recent call to withdraw just over half of the 4,500 U.S. troops in Afghanistan has been condemned as an act "that would hurt our allies and delight, delight, the people who wish us harm".

Voices // 3 days ago
Trump could test system again with threat to Iran
Certain indicators suggest that an American pre-emptive military strike against Iran's nuclear programs is still possible, however unlikely.

Voices // 4 days ago
Urban development, pandemic will further diversify suburbs
Dec. 1 (UPI) -- The suburbs are more diverse in terms of class and race than they used to be. Now, changing patterns of urban development and the impact of COVID-19 may transform suburbs further. 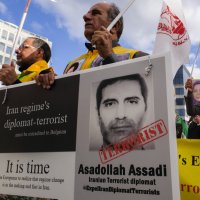 Voices // 5 days ago
Iranian diplomat on trial for terrorism
Nov. 30 (UPI) -- The trial has begun for Assadollah Assadi, a senior diplomat from the Iranian Embassy in Vienna, and three co-conspirators on charges of terrorism.