China, U.S. are on a collision course

For good or ill, America and China are on a collision course. The image of the unsinkable giant ocean liner Titanic and the massive iceberg come to mind with two exceptions. The first is that either America or China could be the Titanic or the iceberg. Second, if this collision occurs, both the ship and the berg will sink.

How we got here and where we are headed are the relevant questions. History may be inevitable in hindsight. But the future is not.

Since the 13th century, Mongols and, later, the Ming and Qin dynasties that lasted until 1911, China embraced the "Middle Kingdom" philosophy of cultural superiority. When Lord McCartney was sent by King George to China in 1793, the Qianlong emperor kept him waiting for months. During the meeting, the emperor told McCartney that nothing the "barbarians" could offer in tribute was needed by China.

In the 1840s and the Opium Wars, that cosmic arrogance began the dissolution of the dynasty. The "opening" of China and the "century of humiliation" continued until 1949 with the Communist victory over the Nationalists. Then, China was a backward, impoverished state.

In America, the Truman administration was accused of "losing China" as if it was ours to give away. The Nationalists under Chiang Kai-Shek were corrupt as well as incompetent. The next year, Joseph Stalin saw an opportunity in early 1950 when Secretary of State Dean Acheson failed to include South Korea in a speech drawing a line against Soviet expansion.

On June 24, 1950, North Korean troops poured across the 38th parallel dividing north and south, nearly ejecting U.S. and U.N. forces from the peninsula. The brilliant amphibious landings at Inchon, the port of Seoul some 30 miles from the DMZ, outflanked the North Korean Army. U.N. forces under the command of General of the Army Douglas MacArthur raced north.

But as U.N. forces approached the Yalu River and the Chinese border that November, China signaled it would intervene. MacArthur refused to listen. On Thanksgiving Day 1950, China massively attacked, ultimately driving U.N. forces to the 38th parallel and a stalemate ending in the 1953 truce.

Nearly 20 years later, Richard Nixon went to China and a brand new relationship was born. Successive presidents cultivated that relationship. George H.W. Bush, who had been the first de facto ambassador to China, had to cope with the 1989 Tiananmen Square Massacre. But relations got back on track.

Bill Clinton, George W. Bush and Barack Obama assumed that "capitalism with a Chinese face," as Deng Xiaoping described it, ultimately would lead to a more democratic and open country. As China rapidly modernized, built up its military, continued to appropriate American intellectual property and took harder edge policies, the Obama administration realized it needed to recalibrate its Asia policy. With the wars winding down in Afghanistan and Iraq and North Korea's earlier detonation of a nuclear device, the administration declared a "strategic pivot" to Asia in late 2011.

Unfortunately, the announcement and its mishandling managed to offend China and frighten our friends and allies in the Pacific. The pivot became a "rebalancing." However, the Obama Pentagon issued its "4+1" strategy, declaring the United States must deter -- and if war comes, defeat -- China or Russia or North Korea or Iraq. The Trump administration has continued that strategy focusing on the two near peer competitors, China and Russia, and renaming the Pacific Command, Indo-Pacific.

Angered by continued Chinese IT theft and a $400 billion annual trade deficit, the Trump administration drew a tough line with Beijing. After withdrawing from the Trans Pacific Partnership, Trump imposed a series of tariffs provoking an unwinnable economic war.

That the coronavirus began in China has been political gasoline poured onto these other fiery disputes. Despite lack of proof, some believe the virus originated from one of the two infectious disease laboratories in Wuhan. Regardless, in the 2020 election, Democrats and Republicans will run against China.

China and its President Xi Jinping seem unmoved. The Belt and Road initiative is progressing to enhance China's access and influence to markets and resources. The propaganda war has intensified over COVID-19 and responsibility for the cause. The tariff war has not been resolved. And China is flexing its military muscles in its bordering seas while using its handling of the pandemic as a model to contrast with failures elsewhere.

Will Titanic or the iceberg change course? Neither skipper seems so inclined.

Harlan Ullman is senior advisor at the Atlantic Council. His last book is "Anatomy of Failure: Why America Loses Every War It Starts."

Voices // 23 hours ago
Police officers accused of violence often have a history of complaints
June 1 (UPI) -- Decades of research on police shootings and brutality reveal that officers with a history of shooting civilians are much more likely to do so in the future compared to other officers.

Voices // 3 days ago
Mexico's other epidemic: 10 women murdered a day
May 29 (UPI) -- Domestic violence has spiked in Mexico during its coronavirus-related lockdown. But even before the pandemic, women in Mexico felt under siege. 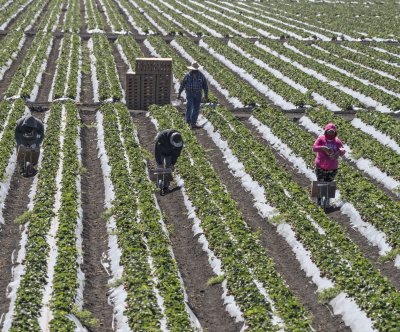