Iranian women pass a branch of the Melat Bank that was burned during the protests in Shahriar, Alborz province, Iran, on November 20. Photo by Abedin Taherkenareh/EPA-EFE

Dec. 2 (UPI) -- The nationwide uprising raging across Iran has dark and bloody parallels with the Hungarian uprising of 1956, when tens of thousands of students, leaderless at first, took to the streets of Budapest and were fired on by State Security Police. As news spread about the death of one student, disorder and violence erupted across Hungary and the government collapsed.

As the fighting stopped and normality returned, a new government under Imre Nagy declared its intention to withdraw Hungary from the Warsaw Pact. Unfortunately, this became the first major challenge to Soviet control and soon the Red Army was sent in to crush the revolution. But the world had learned a historic lesson. A corrupt and repressive government, which orders its security forces to kill its own people, as it desperately tries to cling to power, is on its last legs, doomed to disintegrate. The Hungarian revolution toppled their criminal regime and would have been an outstanding success, but for the malicious intervention of Moscow and the Soviets. Shamefully, the West stood back and watched the Soviet invasion of Hungary and did nothing.

There are echoes of the Hungarian revolution in Iran, where hundreds of thousands of students have taken to the streets in 176 cities, across 31 of the country's provinces. Terrified of losing their grip on power, the theocratic fascist regime run by the mullahs has ordered its gestapo, the Islamic Revolutionary Guards Corp, to open fire on the student protesters. So far it is estimated that over 450 have been killed, although that figure is likely to be much higher as the regime tries desperately to hide the extent of its vicious crackdown. The mullahs have closed down the Internet in an attempt to prevent news of their brutality spreading on social media, but video footage has emerged depicting scenes of shocking atrocities.

In Gorgan, plainclothes thugs from the IRGC surrounded a young student protester and shot him at close range with a pistol. As he fell to the ground wounded, another IRGC thug killed him with an ax. This savagery took place in front of dozens of astonished members of the public, who could barely imagine such horrors occurring in Iran in 2019. On Nov. 16 in the Sattar Khan district of Tehran, Nikta Esfandani, a 14-year-old girl, was fatally shot in the head. Her family was informed that because she was a minor, they didn't have to pay for the bullet. An 11-year-old boy was killed by the IRGC in the city of Khomeinishahr, another innocent victim of the indiscriminate shoot-to-kill policy.

The uprising began in December 2017. Hundreds of thousands of Iranian women, students, teachers, truck drivers, sugarcane factory workers, business owners and pensioners took to the streets to protest the violence and larceny of the fascist clerical regime. They were raging at the venally corrupt mullahs who for 40 years have stolen Iran's wealth to fill their own pockets and to wage proxy wars across the Middle East in Syria, Yemen, Lebanon and Iraq. Courageous resistance units of the main opposition movement, the People's Mojahedin Organization of Iran/Mojahedin e-Khalq, coordinated the protests during which hundreds were killed and injured and many thousands arrested. MEK supporters face certain torture and execution if they are apprehended, but undeterred, their influence grew and spread.

For the past two weeks, the uprising has taken on an entirely new dimension. Iran's 80 million citizens are now in open revolt, tearing down posters of Ayatollah Khamenei, the supreme leader and torching government buildings. In an unprecedented admission on state-controlled television, Abdolreza Rahmani-Fazil, the regime's interior minister, acknowledged that over 200,000 protesters had taken to the streets of Iran's cities demanding "regime change." He blamed the MEK for fanning the revolt and disclosed that protesters had destroyed at least 50 police and army centers, 140 government centers, 183 police vehicles, nine seminaries, 731 state-affiliated banks and 70 gas stations.

The interior minister's acknowledgement is sure to be a significant underestimate of the true extent of the protests, which now represents the biggest political upheaval since the 1979 revolution that brought the mullahs to power. There is no question that the Iranian people have lost their fear and the mullahs realize that they are facing the end of their brutal reign of terror.

Had the West openly declared its support for the Hungarian uprising in 1956, Soviet Premier Nikita Khrushchev would have thought twice about sending in troops to crush the revolution. But typically, the West sat on its hands. The West's betrayal left the people of Hungary to face another 35 years of Soviet oppression. We must not repeat that historic blunder.

The United Nations, European Union and all Western nations must condemn the violence and savagery of the Iranian regime. The West must make it known that we stand shoulder to shoulder with the protesters in Iran demanding regime change. There must be no impunity. Supreme leader Ali Khamenei, President Hassan Rouhani and all of their thuggish IRGC commanders must be held to account. They must be indicted for crimes against humanity and face justice in the international courts.

There is a government-in-exile waiting to restore peace, democracy and stability to Iran, led by Maryam Rajavi, president-elect of the National Council of Resistance of Iran. With the imminent demise of the mullahs, the Iranian people can look to a bright future where oppression is ended and human rights and women's rights are restored, in a country that abolishes the death penalty and ends the threat of nuclear proliferation and Middle East domination. 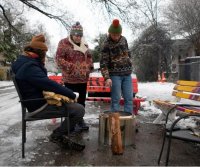