Europe must open a new chapter on Iran

Josep Borrell will shortly take on the role of high representative for foreign affairs and security policy in the European Union. File Photo by Sarah Yanez Richards/EPA EFE

Nov. 15 (UPI) -- The former foreign minister from Spain, Josep Borrell, will shortly take on the role of high representative for foreign affairs and security policy in the European Union. He faces a Herculean task, particularly in the Middle East, where popular uprisings are raging across Iran, Iraq and Lebanon and U.S. President Donald Trump's unilateral withdrawal from the Iran nuclear deal has created a policy vacuum.

Borrell will replace Federica Mogherini, the Italian socialist, who was a slavish appeaser of the fascist theocratic regime in Iran. She was a regular visitor to Tehran, where she would wear the veil in submission to the mullahs' misogyny and pose for selfies with the turbaned tyrants. She was also an arch critic of the U.S. administration's re-imposition of tough sanctions on Iran.

When Borrell begins to sift through the bulging in-tray on his desk in the Berlaymont Building, the European Commission's headquarters in Brussels, he will be staggered by the pressing items confronting the EU in the Middle East. After eight blood-soaked years in Syria, Bashar al-Assad's civil war lurches on, backed by the Iranian regime to the tune of over $20 billion and an estimated 2,500 Iranian military lives so far. The Houthi rebels continue to foment unrest in Yemen, fighting a proxy war on behalf of their Iranian sponsors. The Iranian mullahs fund and control the brutal Shi'ia militias in Iraq, who have murdered thousands of innocent Sunnis. They provide massive financial support for the terrorist Hezbollah organization in Lebanon and for Hamas in Gaza.

Every dollar spent in pursuit of their policy of aggressive Islamic revolutionary expansionism is a dollar stolen from the 80 million beleaguered Iranian citizens who are facing, domestically, a collapsing economy, disintegrating medical system, rapidly diminishing ground water and an environmental crisis.

The Islamic Revolutionary Guards Corps, which controls most of the Iranian economy, acts like the regime's gestapo, brutally oppressing anyone who stands in its way. Gen. Qasem Soleimani, leader of the powerful paramilitary organization's overseas arm -- the Quds Force, supervises Iran's direct involvement in every conflict. Soleimani has been sent to Baghdad to quell the Iraqi protests. He has boasted publicly, "In Iran we know how to deal with protesters." Masked gunmen from the Tehran-controlled Popular Mobilization Forces, deployed by Soleimani, have killed over 270 of the unarmed Iraqi protesters. In each of these conflicts, Vladimir Putin has seized his chance to extend Russia's influence.

Borrell needs to open a new chapter on EU policy in the Middle East. He must accept that appeasement has failed. Europe's desperation to placate the Iranian mullahs arose directly from the ashes of the Obama administration's policy. But Iran's increasing hostility in recent weeks, with their explosive stealth attacks on oil tankers in the Strait of Hormuz and missile strikes on Saudi oil installations, proves that they are not prepared to abandon their belligerent behavior. Borrell must persuade the EU to give up trying to revive former U.S. President Barack Obama's flawed deal, which never stopped the mullah's clandestine attempts to build a nuclear weapon and indeed simply released $150 billion of frozen assets that the regime rapidly used to sponsor their policy of aggressive expansion and international terror.

It was shameful to see the EU placing more emphasis on trade and commerce than on human rights. The people of Iran expect Europe and the United Nations to be on their side. They expect their calls for democracy to be taken seriously. Human rights and women's rights cannot be compromised or marginalized on the pretext of political considerations, trade deals or the flawed nuclear agreement. Obama's appeasement policy, lamely followed by the EU, is dead in the water.

Opponents of the theocratic Iranian regime inside Iran are regularly imprisoned, tortured and hanged, often in public. An estimated 100,000 political prisoners have been murdered since the ayatollahs seized control of Iran in 1979. Since President Hassan Rouhani took office in 2013, over 4,000 people have been executed, including many women and even a number of juveniles. The United Nations is investigating how the regime executed over 30,000 political prisoners in 1988. Amnesty International published a 94-page report titled "Caught in a web of repression: Iran's human rights defenders under attack." It detailed 45 specific instances of what the organization described as a "vicious crackdown" coinciding with the supposedly "moderate" presidency of Rouhani.

There are trained Iranian Ministry of Intelligence & Security agents implanted in every European embassy. Their job is to track down and eliminate political dissidents or enemies of the fundamentalist regime. Borrell will be aware that on June 30, 2018 German police arrested Assadollah Assadi, a diplomat from the Iranian Embassy in Vienna and charged him with terrorist offenses. On the same day, Belgian police arrested an Iranian couple from Antwerp after 500 gm of high explosives and a detonator were found in their car. They admitted Assadi had given them the bomb and instructed them to detonate it at the Iranian democratic opposition rally being held in Villepinte, near Paris that weekend, attended by prominent international speakers like Trump's attorney Rudy Giuliani, former U.S. House Speaker Newt Gingrich and former New Mexico Gov. Bill Richardson. The arrested MOIS agents are awaiting trial in Belgium. Borrell must surely realize that the EU cannot continue to tolerate a regime that has defiled the whole concept of diplomacy.

Last December, the Albanian police uncovered a plot to assassinate Iranian opposition members in Tirana. Albania's Prime Minister Edi Rama expelled the Iranian ambassador and first secretary. In the United States, Iranian agents were convicted of mounting a surveillance operation aimed at identifying and assassinating leading anti-regime dissidents. Yet despite clear evidence that Iranian embassies are now used as terror cells and bomb factories, the EU has continued to search for ways of doing business with Iran. Germany, France and the Netherlands still do significant trade with the theocratic regime, despite America's tough new sanctions.

In Iran, more than half the population of 80 million is under 30. Around a quarter of young people are jobless, more in some harder-hit regions. The Iranians are among the most pro-Western people in the Middle East. Yet they are ruled by a clique of elderly, bearded, deeply corrupt mullahs, who have drained the country's rich oil resources to feather their own lavish lifestyles and to fund their revolutionary expansionism and proxy wars. This is why millions of people have taken to the streets inside Iran, but also in Iraq and Lebanon, demanding an end to Iranian meddling in the Middle East and an end to corruption and oppression.

Borrell must demonstrate the EU's support for the people of those beleaguered nations who risk their lives in daily protests against their oppressors. The Iranian ayatollahs have a finger in every pie. They control an evil regime that should be toppled. There are brave members of the People's Mojahedin of Iran (PMOI/MEK), the main Iranian opposition network, in resistance units operating in almost every town and city inside Iran. These heroic resistance fighters aim to bring an end to the evil theocratic tyranny that has wrecked and impoverished their country and blighted the lives of millions throughout the Middle East.

As Europe's new high representative for foreign affairs and security, Borrell must tell the people of Iran, Iraq and Lebanon, that they have EU support and that the people of Europe stand shoulder to shoulder with them in their struggle to overthrow the tyrants.

Voices // 4 days ago
China trade deal fails to solve some fundamental issues
Jan. 17 (UPI) -- U.S. President Donald Trump signed a trade deal with China on Wednesday intended as a first phase toward a more comprehensive agreement between the two countries.

Voices // 5 days ago
America must seize the opportunity in Libya
Jan. 16 (UPI) -- As fighting continues in Libya, it is time that America and President Donald Trump unambiguously support a political solution for Libya through its Government of National Accord. 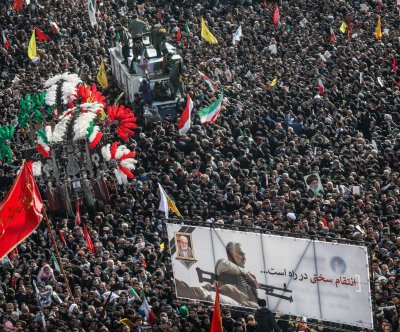