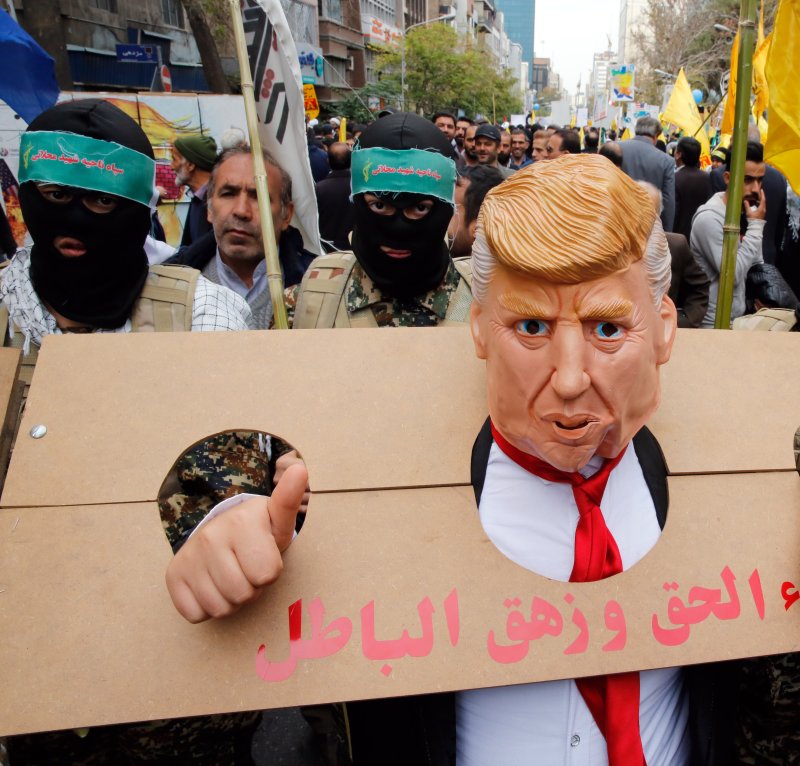 An Iranian man wearing an effigy mask of U.S.  President Donald Trump takes part in an anti-U.S.  demonstration marking the 40th anniversary of U.S.  Embassy in Tehran on Monday. Photo by Abedin Taherkenareh/EPA-EFE

Nov. 4 (UPI) -- Monday marks the 40th anniversary of the Iran hostage crisis. It also marks 40 consecutive years of hostage-taking and terrorism by the Islamic Republic of Iran's agents and allies. For four decades, Western powers have regrettably but repeatedly failed to address the looming Iran threat or the belligerent regime's underlying ideology.

At present, at least 17 dual nationals are held captive by Iranian authorities, often on the flimsiest of pretenses. Although most of them have been charged with espionage or similar "national security" crimes, no justification has been offered for those charges other than the fact that their targets have close affiliations with the United States or Europe.

At least four American citizens are serving 10-year sentences, although Iranian authorities have hinted that they might be released earlier if the U.S. government is willing to pay a ransom. In October, Iran's foreign ministry emphasized this point by providing the White House with a list of Iranian nationals who have been jailed in the United States for sanctions violations and other crimes, along with the message that they "must be freed."

There are some who would argue that Washington should do whatever is necessary to secure the freedom of falsely imprisoned U.S. citizens. And it is fair to acknowledge that there might be more at stake for those Americans than for the Iranians whom Tehran has identified.

Several of these detainees' advocates spoke to the media after Iran issued its demand for the release of its own citizens. Some expressly condemned the regime's "hypocrisy" and emphasized all they had learned about the conduct of Iranian authorities. Others urged more concerted Western actions to end the false imprisonment of American citizens.

But as much collective suffering as has been endured by these Americans and other Western nationals over the years, it pales in comparison to the horrors the Iranian people have experienced at the hands of their own rulers. Just as Tehran has taken aim at Western nationals, the plight of Iran's own population has worsened too. Amid Iranian authorities' brutal suppression of pro-democracy protests in early 2018 -- a nationwide uprising that featured citizens calling for a comprehensive change of government -- the number of Iranian political prisoners swelled by the thousands.

Many of these detainees are facing lengthy prison sentences. But the regime's threat does not stop there. Mass arrests are a reminder of the Islamic Republic's past crimes against humanity, particularly the massacre of 30,000 political prisoners in the summer of 1988. That incident stemmed from a fatwa by Ayatollah Khomeini that declared all opponents of the theocratic system to be at war with God himself, and thus subject to summary execution.

The main target of that clerical edict was the highly capable resistance organization known as the People's Mojahedin Organization of Iran (PMOI/MEK) and this group made up the overwhelming majority of the massacre's victims. The movement endured in spite of the fierce persecution and even thrived in the ensuing decades. Last year, it was credited with leading the countrywide anti-regime protests and giving voice to the people's progressive aspirations. But Khomeini's fatwa remains in force, and political prisoners have been executed for actual or perceived support of the MEK.

Although supreme leader Ali Khamenei acknowledged the MEK's role in 2018, he also blamed the protests on a "triangle" of enemies in Washington, Tel Aviv, and Riyadh. This reflects a longstanding strategy of conflating foreign and domestic opposition to the clerical regime, in hopes of directing supporters to reject both trends as one. The MEK traces this strategy all the way back to the hostage crisis at the U.S. Embassy when the new regime sought to exploit anti-Western sentiment by compelling hard-liners to line up behind the ayatollahs, thereby excluding alternative visions for Iran's future.

The Iranian regime's persistent, simultaneous aggression toward both foreign influence and domestic dissent raises questions about the wisdom of using prisoner swaps and other concessions to secure the freedom of Western nationals.

These tactics were used, for instance, in 2016 around the time that the Iran nuclear deal was implemented. Four Americans were released in January of that year, but only in exchange for the United States settling an old debt to the previous Iranian government, as well as releasing or dropping charges against 21 Iranian nationals. This only served to reinforce the impression that hostage-taking is a potentially lucrative endeavor. It is therefore no surprise that all four of the American hostages were promptly replaced by others.

It is safe to assume that this pattern will repeat for as long as the United States and its allies take a short-term approach to addressing Iranian hostage-taking. The only way this phenomenon's recurrence can be prevented over the long term is if Tehran's behavior -- or the regime itself -- changes completely. Last year's public protests underscore the fact that this outcome is within reach. But for the Iranian people to grasp it, they must recognize support from foreign governments that are interested in more substantial goals than the begrudging release of Iran's hostages du jour.

Domestic unrest demonstrates that there is no need for Western powers to actively pursue regime change. But they most definitely should promote an alternative vision for Iran's future -- the very same vision that Tehran sought to suppress in 1979 with the false imprisonment of 52 Americans and again in 1988 by executing 30,000 of Iran's own citizens.

Ivan Sascha Sheehan is executive director of the School of Public and International Affairs at the University of Baltimore. Follow him @ProfSheehan.

On This Day: Militants seize U.S. Embassy in Tehran 3 killed in political protest at Iranian consulate in Iraq Trump imposes sanctions on Iran while renewing waivers