Oct. 11 (UPI) -- As street protests escalate in Iran and Iraq, there is only one target for the demonstrators -- the fascist mullahs' regime in Tehran.

In Iran, thousands of protesters have taken to the streets in Lordegan, Arak, Isfahan, Shush and other cities, chanting "Down with the dictator" and "Neither Gaza or Lebanon, I give my life for Iran." In neighboring Iraq, mass protests have called for the complete withdrawal of Iran and its agents from their meddling in Iraqi internal affairs.

In both countries, the Islamic Revolutionary Guards Corps, the Iranian regime's gestapo, has ruthlessly attempted to crush the popular uprisings. In Iran, it has used violence, tear gas and rubber bullets, to try to disperse the demonstrators, igniting further anger, which led, in Lordegan, to the torching of the governor's office. Across Iran, giant billboard posters of Iran's corrupt and psychotic supreme leader Ayatollah Khamenei have been set alight by groups of youths eager to show their deep loathing for the mullah's repressive regime and their demand for change.

The regime's officials have accused resistance units of the main democratic opposition movement, the PMOI/MEK (Mojahedin e-Khalq/People's Mojahedin of Iran), of orchestrating the protests. According to the state-run news agency "Mehr," an IRGC commander -- Ali-Mohammad Akbari said: "The Monafeqin [the regime's slanderous term for the MEK] were present in the recent riots. They covered their faces and were guiding people."

The regime's growing fear of the MEK and their panic at the thought of a new revolution hurling them from power becomes more evident day by day with their increasingly hysterical outbursts. The appearance across Iran of banners, posters and graffiti supporting the MEK and the opposition leader Maryam Rajavi adds to their growing anxiety.

Meanwhile in Iraq, snipers and gunmen from the Hashd-al-Shaabi militia have killed and wounded dozens of protesters. Hashd-al-Shaabi is financed and run by the IRGC. It forms a key part of the so-called popular mobilization units inside Iraq. They were created from a variety of ruthless Shi'ia militias by the terrorist IRGC and its leader Gen. Qasem Soleimani in the wake of the Islamic State invasion of Iraq. Soleimani controls Hashd-al-Shaabi and the other Iraqi militias through his senior IRGC commanders who have been installed as "diplomats" in the Iranian Embassy in Baghdad. Even the Iranian consulates in Basra, Karbala and Najaf have been taken over by IRGC military officers posing as diplomats.

Brig. Gen. Iraj Masjedi has swapped his IRGC uniform for a business suit so that he can pose as the Iranian ambassador to Iraq. His deputy, also now attired in a business suit, is Seyyed Mousa Alizadeh Tabatabai, another IRGC briagdier general. Both of these senior military commanders have masterminded numerous terrorist attacks inside Iraq and across the wider Middle East.

They have been deployed to Baghdad to help suppress the popular uprising and to supervise strict Iranian control of Iraq's new prime minister, Adel Abdul-Mahdi, a malleable puppet of Tehran. Mahdi parroted the mullahs' paranoia recently by blaming the MEK for a recent drone attack on a Hashd-al-Shaabi base near the town of Amerli in the Salahaddin Governorate of central Iraq, which resulted in one death and four serious injuries. Clearly the ayatollahs are writing Mahdi's press releases and speeches in Tehran.

The Iranian mullahs now use their extensive network of senior IRGC personnel posing as diplomats in Iraq to spearhead their policy of aggressive military expansionism and meddling in Syria, Yemen, Lebanon, Saudi Arabia, Jordan and Turkey. There are nine military attachés in the regime's embassy in Iraq, all of them members of the Quds Force. IRGC Brig. Gen. Mostafa Moradian leads the military attachés at the embassy. IRGC Brig. Gen. Ali-Mohammad Rezai is his second-in-command. IRGC Cols. Ruhollah Bakhshizadeh and Hassan Ashireh are among the other military attachés.

One of the nine military attachés is also the bureau chief of the regime's news agency in Iraq. In addition to the military attachés, Seyyed Mohammad-Reza Tabai, affiliated with the regime's police, is based in the Iranian embassy. Mehdi Qassemi is the Iranian Ministry of Intelligence & Security station chief at the embassy, with Ali Qaemi as his deputy MOIS station chief. In addition, MOIS agent Behrouz Nowruzpour and two or three other MOIS officers are stationed in the Baghdad embassy.

The twin pillars on which the Iranian regime is founded are domestic suppression and the export of terrorism and Islamic extremism. Their current activities inside Iran and Iraq are clear indications of these activities. Last month Khamenei's representative in Mashhad said: "Today Iran is not limited by its borders. Today Iraq's Hashd Al-Shaabi is Iran. Lebanese Hezbollah is Iran. Yemen's Ansarollah [Houthi militia] is Iran. The Vatani front in Syria is Iran. Palestine's Islamic jihad is Iran. Palestine's Hamas is Iran."

The Iranian threat to the Middle East has been recognized by the Americans. The U.S. Ambassador to Saudi Arabia John Abizaid recently said the Iranian regime meddles in nearly every country in the Middle East via "various militias that are under Iranian control."

U.S. Secretary of State Mike Pompeo has called the Iranian regime a "thuggish police state," saying, "Iran's Ministry of Intelligence and Security and the Islamic Revolutionary Guard Corps are the cudgels of a despotic theocracy, with the IRGC accountable only to a supreme leader. They're the vanguard of a pernicious empire that is expanding its power and influence across the Middle East."

U.S. President Donald Trump has described the Iranian regime as the world's greatest sponsors of terrorism. His decision to withdraw America from Barack Obama's flawed nuclear deal and to impose tough sanctions on Iran have struck a hammer blow against the mullahs and their henchmen. Their increasingly dangerous and hostile reaction has been to mount a series of attacks on Saudi oil installations and on foreign flagged oil tankers in the Gulf of Hormuz.

The belligerent behavior of the Iranian regime proves that attempts at negotiation or appeasement are pointless. Europe and the West must show support for the oppressed Iranian and Iraqi millions, who are daily risking their lives in street protests. We need to show our support for the MEK democratic resistance movement in Iran and fully endorse their courageous determination to remove this evil regime from power and replace it with a secular democracy.

Voices // 3 days ago
Capitol siege raises questions over White supremacists in police ranks
Jan. 15 (UPI) -- The apparent participation of off-duty officers in the rally that morphed into a siege on the U.S. Capitol on Jan. 6 has revived fears about White supremacists within police departments.

Voices // 4 days ago
Angry men: Capitol riots marked by hatred toward women
Jan. 14 (UPI) -- Among the various forms of violence on display during the U.S. Capitol insurrection, one has been largely overlooked: misogyny, or hatred toward women. 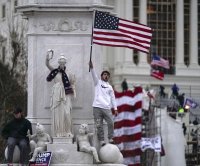 Voices // 6 days ago
Fired for storming the Capitol: Most workers aren't protected
Jan. 12 (UPI) -- Can you be fired for joining a violent mob that storms the Capitol? Of course you can. It's not even a close case. Non-unionized workers in the United States -- about 90% of all workers -- are employed at-will. 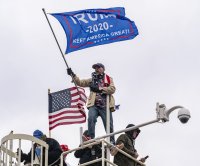 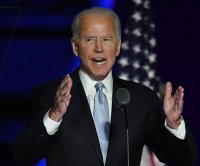