By
Liana Semchuk, University of Oxford

Sept. 27 (UPI) -- By now, Ukraine's citizens are used to being trapped between a rock and a hard place. In recent years, their country has often being used as a piece on the global political chessboard. The latest controversy puts Ukraine at the center of a political battle between Democrats and Republicans in the lead-up to the 2020 U.S. presidential election.

At the heart of the issue is a phone call in July between U.S. President Donald Trump and Ukraine's newly elected President Volodymyr Zelensky. The controversy, which emerged after a complaint from a whistle-blower, centers around an alleged threat Trump made during the call to withhold military aid to Ukraine unless Kiev launched an investigation into Joe Biden's son, Hunter, and his involvement with Burisma, a Ukrainian gas company. Democratic presidential hopeful Joe Biden, the former vice president, is Trump's most likely challenger for the presidency.

The news sparked Democrats in the U.S. Congress to open an impeachment investigation into Trump. In Ukraine, however, the story has been received differently.

To say that most Ukrainians, including Zelensky want to be kept out of Washington's political games would be an understatement. To most -- if not all -- Ukrainians, the main focus remains the ongoing war in the eastern Donbas region, and the failed attempts to end it. To date, the war has claimed lives of more than 13,000 Ukrainians, rendered about 2 million people internally displaced and robbed thousands of children of an opportunity to grow up in a home instead of an orphanage.

The war in eastern Ukraine has been supported by Russia since mid-2014, according to a new body of evidence that found Russia began to deploy its military forces to the Donbas during that time.

Those living on the front lines in the Donbas are especially disinterested in what the infamous phone call means for politicians on Capitol Hill in Washington. They wake up each morning not to the sound of an alarm clock, but to heavy shelling down the road. The daily worry for these people is where their next meal will come from. As one resident in a town on the front lines of the fighting told Radio Free Europe regarding the controversy: "We are only interested in what can be put in our stomach."

While the coverage of Trump's potential impeachment has dominated front pages in the West, little attention has been dedicated to the topic in Ukraine.

Keeping out of it

Since the news broke, Zelensky has desperately tried to keep himself and Ukraine out of Washington's political games. Speaking in New York at the U.N. General Assembly, he said that he hadn't been "pushed" to investigate Hunter Biden. Zelensky also clarified that he wants to be kept out of the controversy: "I am sorry -- I don't want to be involved in open democratic elections of the USA," he said.

Zelensky's attempts to distance Ukraine from Washington's political mess not only reflect the sentiment among millions of ordinary Ukrainians, but are also a wise move for him personally.

Ukraine has historically had extremely low levels of confidence and trust in government, a pattern that Zelensky and his Servant of the People party have broken for the first time since Ukraine's independence. According to an August poll by the Ukrainian foundation Democratic Initiatives, 70 percent of the citizens trust the newly elected president. The tug of war between the Democrats and the Republicans threatens to undermine this newly found trust and confidence of the Ukrainian people in the administration. To maintain this public approval, Zelensky will desperately want to keep himself out of the controversy and focus on moving forward with his promised reforms.

Partnership with the West

Ukraine's new government has made a number of changes aimed at rooting out corruption, such as stripping lawmakers of immunity from prosecution. At the same time, the country is still struggling to resolve the crisis in the Donbas. To that end, Ukraine needs military support from the United States and its European allies. This is precisely why the allegations of Trump withholding military aid, which was eventually released to Ukraine in September after an initial suspension, were crucial.

Although Zelensky denied being pressured by Trump into launching investigations into Hunter Biden, the situation raises questions about just how reliable a partner the United States really is to Ukraine. This is disappointing, especially because many Ukrainians generally epitomize the United States as a paragon of democracy.

This is a crucial time in Ukraine's history. The country finally has a real chance to clean up some of the corruption that has plagued its political system since independence. Political games in the West should not affect whether the country gets the support that it needs to defend itself and to implement reforms.

Meanwhile, shifting the focus away from the war in the Donbas could also give Russia an opportunity to strengthen its position there. The international community would be wise to regain balance by focusing less on electoral games in Washington, and instead consider how the situation could negatively affect Ukraine's struggles to implement reforms and secure peace.

Liana Semchuk is a PhD candidate in Politics at the University of Oxford. 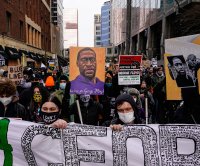