Texas gun laws might not change, but the conversation is evolving

By Ross Ramsey, The Texas Tribune 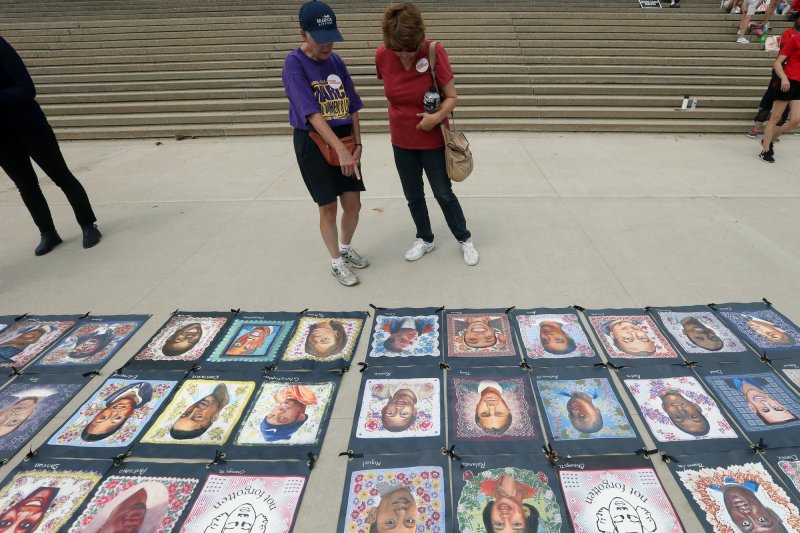 Women examine paintings of some of the children who have been killed nationwide by guns underneath the Gateway Arch during a Mom's Demand Action Rally in St. Louis on August 17. File Photo by Bill Greenblatt/UPI | License Photo

Sept. 20 (UPI) -- It seems safe to say that neither the Texas Legislature nor the Republican Party is going to follow Beto O'Rourke's call for a mandatory buyback of assault weapons.

Actually, it seems safe to say lots of Texas Democrats are just as unlikely to sign up.

But it's also clear that the hard lines drawn over years and years of debating about guns in Texas and in the United States are getting a little blurry.

Texas politicians and officeholders are talking about guns in new ways. Repeated mass shootings can change minds, slowly. Legislative committees and state leaders are talking now about restrictions that were recently considered well out of bounds for Texas, like "red flag" laws and background checks and the like. Democrats, generally more willing to regulate firearms, are lugging around a pile of bills that haven't passed in recent sessions that would tighten laws around possession, use and sale of guns.

Republicans are not lugging a similar stack. But some of them are reconsidering long-held positions.

After mass shootings at Sutherland Springs Baptist Church and Santa Fe High School, Gov. Greg Abbott pulled together some roundtable discussions to talk about possible state action. What came out were suggestions -- many of them now appearing as new state laws -- for mental health monitoring, laws that might make schools safer from attacks and other measures that stayed safely away from possession, use and sale of guns.

Abbott had another idea, too, that has been adopted elsewhere but not in Texas: What about a red flag law that would allow judges, after full hearings, to temporarily take guns away from people deemed dangerous to themselves or others?

It was a move into the gray area between gun control advocates and Second Amendment advocates, and it didn't last a month. Lt. Gov. Dan Patrick announced at the time -- this was a little more than year ago -- that the idea wouldn't get anywhere in his Texas Senate.

But after the more recent shootings this summer in El Paso and in Odessa, Patrick has wandered into that gray area, suggesting an expansion of background checks to include "stranger to stranger" sales between individuals. He wouldn't require background checks when people sell guns to family and friends, but even with that cutout, Second Amendment advocates who have generally considered Patrick a powerful ally are kicking and screaming about his suggestion.

It's not like Texas leaders are suddenly hostile to the Second Amendment, or to gun owners or sellers or even to firearms. Heading to hunting leases or shooting ranges with political reporters in tow remains a staple of state politics. That kind of demonstration of individualism is not going to fade any time soon.

In fact, during their legislative session earlier this year, Texas lawmakers loosened some restrictions on guns.

And you might notice the distance between what Abbott and Patrick and others have dared to talk about and what is still considered untouchable. Expanded background checks don't prevent people from getting guns and don't really affect most buyers. Red flag laws are arguably more about gun owners' mental health and condition than about their guns.

Texas Republicans have not wiggled on issues that directly address the hardware involved. They're maintaining a safe and frankly delighted distance from positions like presidential candidate Beto O'Rourke's "Hell yes, we're going to take your AR-15, your AK-47" declaration in last week's Democratic presidential debate.

O'Rourke and Patrick and Abbott do have one thing in common, however, even though they appear to share little common ground. Each is talking about things that have been verboten in state politics, and in the politics of their two parties.

But the political duck-and-cover drills on Second Amendment issues have changed: Republicans can talk about red flag laws and say they're just considering Abbott's suggestion. They can talk about background checks without being painted as liberals, since they're in lockstep with the lieutenant governor. And the Democrats? They can point to O'Rourke as a radical outlier, claiming everything short of his proposal is a moderate idea.

Maybe the laws won't change in a significant way; there's no way to know, really, until the Legislature or Congress does something. But there is a conversation.